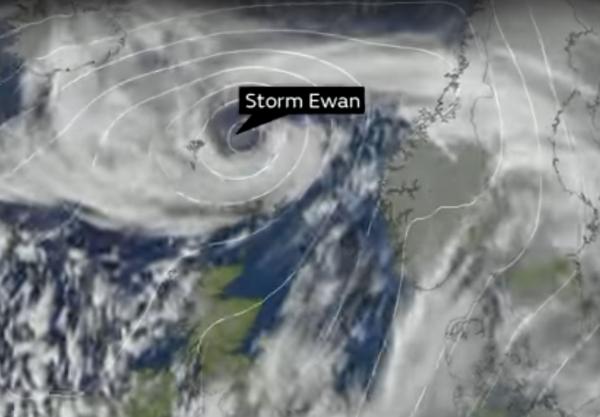 Storm Ewan was named by Met Éireann, the Irish Met service, as the fifth named storm of the season on Saturday Feb 25 night. Storm Ewan brought strong winds to southern areas of Ireland on Sunday 26 and also is partly responsible for the chill that is expected to hit the UK this week.

With Ewan now gone, the next storm will have a female name beginning with the letter 'F'.

Ewan on the wane

The low pressure system that was named Storm Ewan is currently well to the north of the UK. It is expected to swing back across Northern Ireland and northern parts of England during Tuesday as a weakening weather system and while weather warnings are not anticipated will give a spell of rain and hill snow in some areas.

Chief Meteorologist at the Met Office,Andy Page said: “Polar Maritime air is becoming established across the UK with colder conditions expected for the next few days but nothing unusual for late winter. The week will be characterised by wet and windy spells across the southern half of the UK. The rain could turn to snow particularly over higher ground of northern England, Northern Ireland and Wales. Sunshine and showers will develop between weather systems. The North will see drier and colder conditions with a few wintry showers. Frost will be widespread here by night, with a risk of fog and some icy stretches”

This unsettled weather is likely to continue as we head into next week as frontal systems continue to move across the UK from the south or southwest, bringing wet and occasionally windy weather at times which could turn to snow over northern hills.

Picture: Watch the weather below