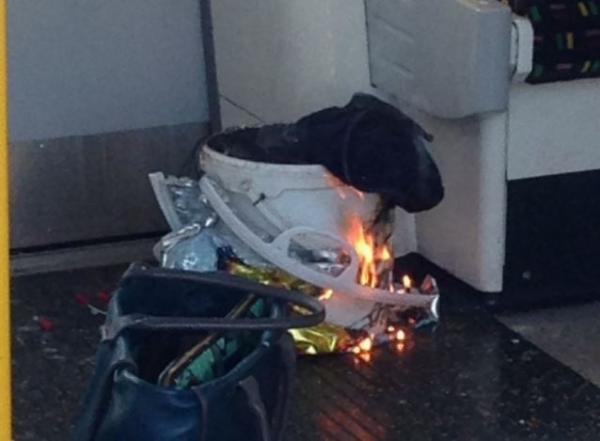 All the emergency services - fire, police, ambulance are currently attending an explosion on a train at Parsons Green Tube station. Deputy Assistant Commissioner Neil Basu, the senior national coordinator for CT policing, has declared it a terrorist incident.

Six fire engines, two fire rescue unit and around 50 firefighters and specialist officers are there with British Transport Police. Along with paramedic colleagues, London Ambulance has sent hazard response teams. Both specialist fire arms officers and armed counter terrorism officers have been deployed.

Initially Tweets from Twitter users at the scene suggested the explosion came from something being transported illegally but without malicious intent. However, counter terrorism officers have now secured the area and have been seen working their way through the train and along the platform. Unconfirmed reports now say wires have been spotted associated with the 'bucket' - see picture. The Metropolitan Police have said: 'We now know this was a detonation of an Improvised Explosive Device'.

The rest of the tube is still running - suggesting the original theory holds stronger in the minds of the security forces (that this is not a terrorist attack.) otherwise, established protocols might have seen the network close down.

Victims are said to have incurred facial burns and injuries inflicted as a result of a 'stampede'.

The London Fire Brigade was called at 8:21am. Fire crews from Fulham, Wandsworth, Chelsea, Hammersmith and other surrounding fire stations made their way to Parsons Green - near Fulham.

'Chaotic panic' is how one eye witness described how people reacted. He said he had spoken to a woman on the carriage who saw a flash, fire and smoke.

Police are advising to commuters to avoid the area. The District Line from Parsons Green to Edgware Road is closed.

One witness has said he heard a whoosh and saw the rear carriage of the District Line train engulfed in flames.

Parents are trying to get to the school next door to the station to collect their children but the cordon put in place by the police has been extended. Buses and cars have been abandoned within the cordon.

Was on #parsonsgreen train when mass of people came rushing at us after 'explosion' on rear carriage. Surreal moment. Adrenaline pumping.

I'm safe - just had to run for my life at #ParsonsGreen station - huge stamped, lots injured. Not sure why - fire/explosion mentioned.

We are aware of an incident at #ParsonsGreen tube station. Officers are in attendance. More info ASAP

Natasha Wills, Assistant Director of Operations at London Ambulance Service said: “We were called at 8:20am to reports of an incident at Parsons Green underground station.

“We have sent multiple resources to the scene including single responders in cars, ambulance crews, incident response officers and our hazardous area response team, with the first of our medics arriving in under five minutes.

“Our initial priority is to assess the level and nature of injuries. More information will follow when we have it.”

Picture: Main - taken onboard the train (not verified). Below - outside Parsons Green 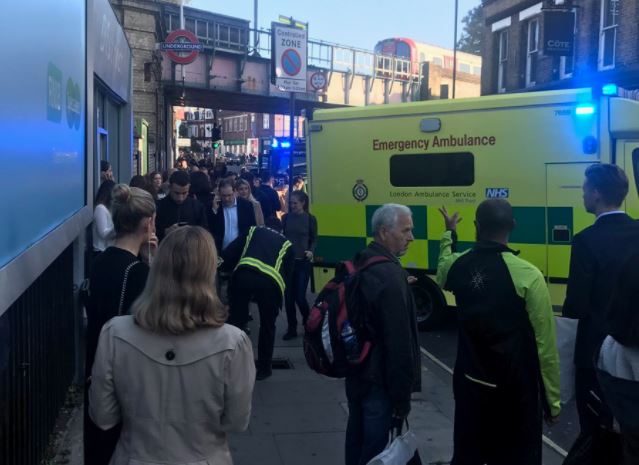