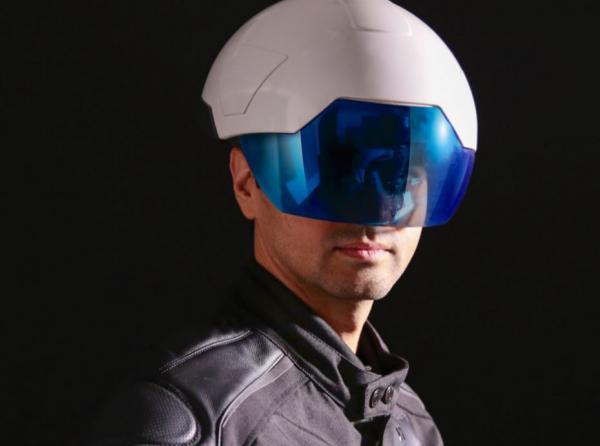 The futuristic helmet, complete with an anti-reflective, scratch-resistant safety visor, looks like something out of the latest sci-fi blockbuster. However, it could soon be seen on construction sites and industrial environments and has been designed to increase productivity, efficiency and safety.

A 13 megapixel high-definition camera is also included that can be used for capturing images and videos; 2D target recognition and tracking and object/colour recognition. The information can be shared in real time.

It will be fully BIM compatible, allowing construction workers to share and view various building elements, data and plans.

The helmet is powered by a sixth-generation Intel Core m7 processor and also includes Intel’s RealSense technology to enhance its depth sensing ability.

A programme within the camera called Intellitrack is able to capture and displays information about the user’s environment. The software allows the location of the wearer to be identified without relying on GPS, Bluetooth or WiFi.

Brian Mullins, Founder and CEO of Daqri said: “Daqri Smart Helmet is an entirely new type of human machine interface that is redefining the future of work by empowering workers with the latest in augmented reality and Internet of Things technologies.

“We’ve been working in the medium of augmented reality for the past four years, and what we found was, you just can’t solve the most challenging problems with devices that were designed for consumers.

“We needed something that was designed specifically for industrial applications.”