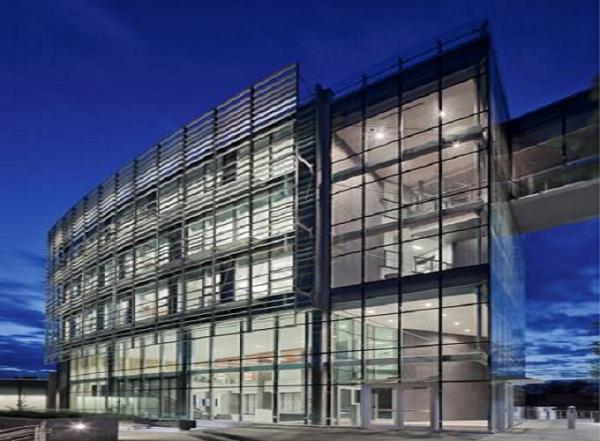 Claiming to deliver ‘remarkable’ aesthetics for architects, developers and building owners. It is said to be the only curtain wall system where the floating glass facade is held away from an attractive aerofoil shaped mullion without the use of obtrusive bolt fixings or transoms.

Its relative simplicity reduces risk of component failure, improves constructability and reduces costs of programme delays in both construction and post-construction phases.

The Simons Center for Geometry and Physics is a centre for theoretical physics and mathematics at Stony Brook University in New York.

It comprises two buildings – the brick ‘bar’ on the north side relates architecturally to the existing buildings adjacent to the site, while a modern curved glass structure on the south side creates a more open mass and main facade of the Center. These are linked by a glazed bridge that promotes collaboration and interaction.

The VS-1 mullion-only curtain walling system was used in the construction of the glass structures. The design and strength of the VS-1 system allowed for the simple integration of a cantilevered aluminium canopy as well as a louvre solar shading system without the need for extra bulky reinforcement.

For maximum impact VS-1 can provide unbroken vertical sightlines of up to 8m with a single pane of glass. The triple height meeting space of the Simons Center is flush glazed with VS-1 mullions notched around the cantilevered building structure. Details such as these enable the exterior glass pane at the front of the structure to appear to ‘float’.

Picture: The Simons Center for Geometry and Physics Stony Brook University in New York has Glassolutions’ VS-1 curtain wall system.

Customers to a luxury car dealership in Birmingham will be able to reflect on the best of its brands with the installation of a glazed manual sliding wall defining the...

Getting Fit by Appearance

An interior design company has shown what can be achieved by the imaginative use of glass in a health clinic.  The Spanish and French team – Alguacil &...

An impressive project to mark the Centenary of the First World War has been installed in St Matthew’s Church in Stoke-on-Trent. Spanning 50ft x 10ft, the stained...

The launch of a new website aims to give full details of a range of fire resistant glazing, security, blast resistant and safety glass. The move follows Promat’s...

Window Horror for the Birds

Many buildings can be hazardous for birds that cannot see glass frontages while flying. A bird friendly glass product, offered by Walker Textures, called AviProtek, is...