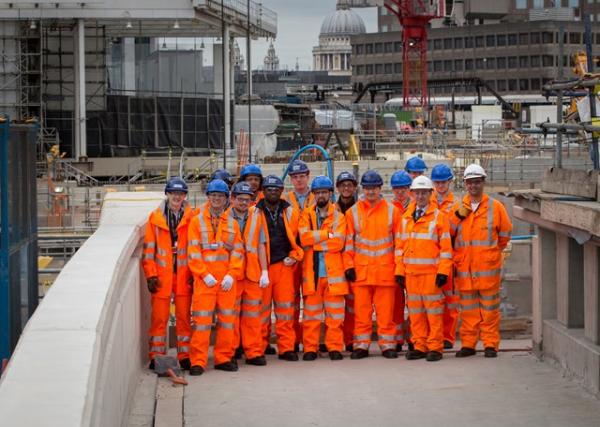 The new group of apprentices, drawn largely from the local area, started work on the £6.5 billion government-sponsored project this month, after completing their first year at Network Rail’s apprentice training facility, shared with the Royal Navy at HMS Gosport.

They are among 191 young people nationally to have completed their first year of training at the facility.

Divided equally between three of the partners working on the Thameslink Programme – Network Rail, Siemens Rail Automation and Balfour Beatty – the apprentices will play a ‘vital’ role in completing one of the most important transport projects in the UK and have their sights firmly set on climbing the career ladder.

Having spent a year learning the basics of railway engineering, the 12 apprentices will now spend a further two years of training on the job, working on a variety of trades from track, to signals and telecoms and electrical engineering.

“I came in to engineering as an apprentice and worked my way up, so I’m keen to give other people that same chance,” explained Mike Netherton, Safety Manager, Thameslink Programme, who has been working with the apprentices to introduce them 'safely' delivering projects on the railway. “Previously we found that most people’s route into project management was through a graduate scheme but this now gives these guys a path there. They are the engineers and project managers of the future.”

The common attitude expressed by the apprenticeships to the scheme and the potential it offers, can be summed up by Gervaise McKinnon, 25. From Shepherd’s Bush, west London and working for Balfour Beatty, he told TwinFM: “I studied engineering at college and at university but having a degree and not the experience doesn’t mix at all and this will help me in my career and move up the ladder.”

As a direct result of the Thameslink Programme, Network Rail has recruited what it terms as ‘significant numbers’ of London residents and given them a range of training opportunities. This has included 75 previously workless Southwark residents who have been employed. A total of 38 of these completed 26 weeks or more employment and 15 are still employed on the project but are yet to complete 26 weeks of sustained employment.

Picture: A new group of apprentices have started work on the £6.5 billion government-sponsored project this month as part of the Thameslink Programme