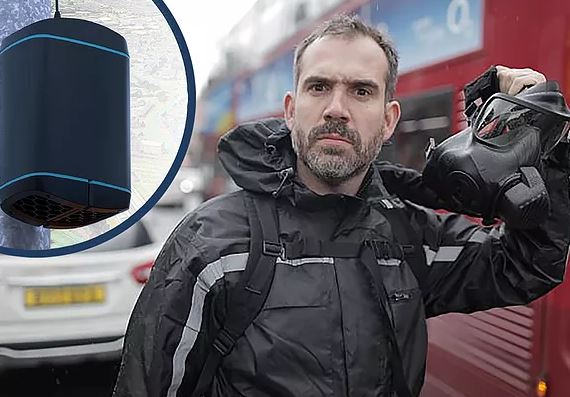 EarthSense air pollution sensors have been used and showcased as part of a BBC online service to demonstrate air quality issues - and the effectiveness of community action to tackle them.

The first outing took place in December 2017 in the Kings Heath suburb of Birmingham to demonstrate the challenges faced by typical urban communities with congested high streets and busy shopping areas.

As part of a day long campaign of action, residents were urged to leave their cars at home, instead using public transport or walking or cycling for the daily commute and school runs. Volunteers carried out people and traffic surveys and Dr Xand van Tulleken showed his support presenting for the BBC TV programme 'Fighting for Air' which was due to air on BBC 2 on January 10 at 9:00pm.

The experiment utilised special air pollution sensors, developed by EarthSense, which monitored changes in air pollution on the day compared to recordings elsewhere in Birmingham.

“The EarthSense air quality sensors provide a tangible way of recording and presenting evidence which can be used to plan and promote further initiatives,” said Professor Roland Leigh, Technical Director of EarthSense Systems. “This programme clearly demonstrates the positive outcomes that can be achieved as a result of community action.”

In the run up to the community initiative EarthSense used its Zephyr air quality monitoring sensors to measure the base line of air pollution along the busy Kings Heath High Street and outside St Dunstan’s Catholic Primary School. Results showed consistently high readings across the course of each of the proceeding 3 days with peaks in Nitrogen Dioxide (NO2) during rush hour and school drop off and pick-ups.

In late 2016, EarthSense has published MappAir – the first ever high resolution nationwide map of air pollution. Combining data from satellites and its own air quality monitoring sensors together with open source data, EarthSense has used complex modelling techniques to create the highly accurate map. Initially available for the whole of the UK at 100 metre resolution, MappAir shows how air pollution, specifically nitrogen dioxide, changes across the country and within towns and cities, highlighting likely sources and potential clean-air refuge areas.

“Air pollution is making headlines across the world for all the wrong reasons,” commented James Eddy, MD. “However, there simply isn’t enough data available for those charged with tackling the issue to make informed decisions. MappAir can provide a street view to city-wide visualisation of air pollution. This is the first in a series of nationwide products that are coming to market in the 2018.”

Using the British National Grid, EarthSense has divided the UK into 100 metre squares – about twice the size of an average football pitch. Air pollution readings from satellites and the air quality monitoring sensors are combined with open data, including traffic emissions and weather conditions, to produce an annual average for each cell. The MappAir data is available to view and purchase online at www.blueskymapshop.com

As additional sensors come online and more historical data is made available, EarthSense plans to produce a range of MappAir products, including an ultra-high resolution 1m dataset for detailed study areas, a 10m map for urban areas, an historic time series of maps showing how air pollution changes over the course of a day and on different days, and forecast maps giving an indication of fluctuations up to three days ahead. EarthSense will also be releasing a map of PM2.5 (ultrafine pollution particles smaller than 2.5 micrometres) later in.

Spearheaded by the Residents Forum, the Kings Heath Clean Air Day promoted ‘leave your car at home’ and took place on Friday 1st December 2017. During the course of the day the Zephyrs captured real time measurements of air pollution and, when compared with the previous days’ results, it became apparent that the community action had achieved significant reductions in NO2.

With the Government recently outlining its plans to tackle climate change while driving economic growth, accurate map based data will be required. These include local planning, enforcement and mitigation strategies, as well as commercial applications such as conveyancing and health diagnostics.

It is hoped the MappAir products will also help with public engagement and behavioural change initiatives.

Picture: The BBC TV programme 'Fighting for Air' was due to air on BBC 2 on January 10 at 9:00pm and will subsequently be available on BBCi