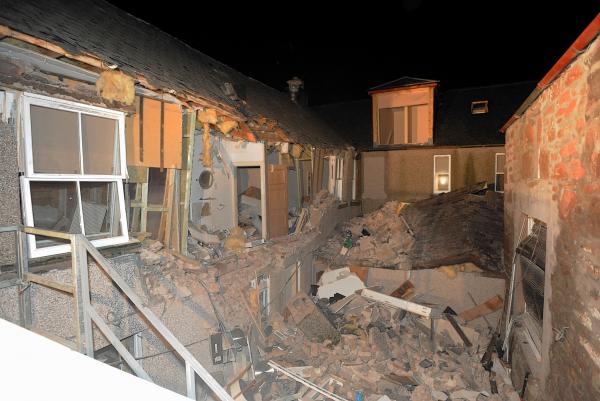 An Aberdeen based catering supply company has been fined after three people were seriously injured in a gas explosion in a hotel kitchen in Auchenblae.

The three – a barmaid, customer and a worker – were caught in the blast at the Drumtochty Arms in Market Square on 7 January 2009, which happened as work was underway on the premises’ gas system.

Aberdeen Sheriff Court heard that Instant Catering Maintenance Ltd (ICM) was employed by the hotel to design and install a new ground floor kitchen to contain three appliances – hotplate range, four ring hob and a freestanding chargrill – that would be fuelled by propane.

On the day of the incident, Danielle Ormond was working in the hotel bar when one of the customers complained about the beer, which led her to go to the cellar to investigate. As she passed through the kitchen, where ICM employee, Neil Coffield, was purging the gas system, she noticed a very strong smell of gas.

Moments later an explosion occurred, causing serious injuries to both Ms Ormond and Mr Coffield and also to a customer, James Guthrie, who was in the courtyard outside the kitchen door, smoking a cigarette. The damage caused by the blast led to the immediate collapse of a substantial part of the building, making it unsafe for investigators from the Health and Safety Executive (HSE) to enter and leading to an emergency demolition order by Aberdeenshire Council.

The court heard that ICM designed and installed a steel manifold to supply propane gas to appliances. However, it was not fitted with an adequate facility to allow for safe purging of the system, which would have prevented gas build up to dangerous levels. All gas appliances should have regulators to ensure correct pressure and for use on a propane-fuelled appliance they should be suitably converted.

When HSE Inspectors examined the recovered appliances, they found that a regulator supplied with the chargrill had not been fitted and that the regulators on the hotplate and hob were found to have been attached the wrong way round and set for natural gas rather than propane. This work had been carried out by another ICM employee.

Mr Coffield confirmed he had noticed the absence of a regulator on one appliance and was told to test the system by lighting it. Mr Coffield decided to purge the system, which involves the removal of air within the pipe work and appliances so it is replaced by the fuel gas, an activity that he was trained, certified and competent to carry out.

Unfortunately, the system had not been designed with a suitable purging point, leading to the pressure testing tap valve being left open for significantly longer than would have been needed had it been designed correctly. Mr Coffield was not provided with a flare stack, which would have allowed him to have safely dissipated the released gas; instead he repeatedly opened the test port whilst trying to light the pilot light of the appliances.

Investigations found that Mr Coffield’s stated actions alone could not account for the build up of gas and the severity of the explosion. The court was not, therefore, asked to proceed on the basis that the company’s failings caused the release of the entire quantity of gas required to cause the explosion. However, it did cause the release of a quantity of gas within the kitchen of the hotel and the risk of injury if that gas ignited.

Instant Catering Maintenance was fined £7,500 after pleading guilty to breaching Section 2(1) of the Health and Safety at Work Act 1974.

“This was an entirely avoidable, very serious incident resulting in significant injuries to three people and the demolition of a building,” stated Niall Miller, Principal Inspector, HSE. “The risks of purging an LPG gas system without using the appropriate equipment are well known and it is clearly stated in industry guidance that flare stacks should be used when dealing with gases heavier than air, such as propane. In addition, purging a system of this type should be carried out by two people to ensure safety.”

Pictured: The substantial damage caused by the gas explosion in the Drumtochty Arms