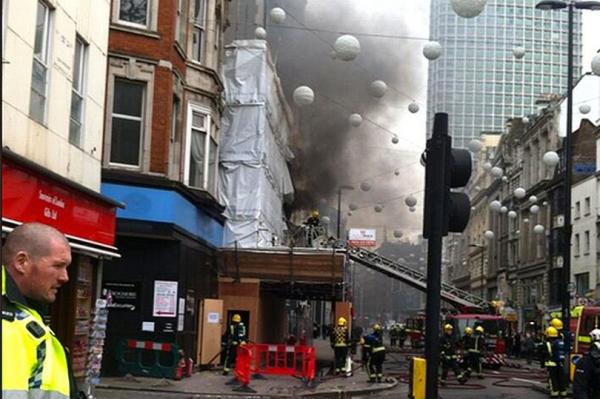 A fire in a basement on London's Oxford Street might have been small in intensity but turned-out to be large in terms of disruption but not quite so disruptive as the hand grenade found in charity retail premise at a Manchester shopping centre. Meanwhile, news has arrived of a blaze at the University of St Andrews in Scotland.

Firefighters dealt with a small fire in the basement of a large department store on Oxford Street in the early hours of Saturday July 1 - a huge trading day for all the stores in the vicinity with the UK public swelling the throngs of London tourists.

A massive clean-up operation was put in place to rectify matters in time for near normal Saturday and Sunday operation.

In 2009, New Look on Oxford Street was given what at the time was a record fine of £400,00 (with costs of £136,000) after  fire safety failings put the lives of hundreds of shoppers at risk. In what the judge described as a 'disaster too awful to contemplate' early evening shoppers in April 2007 had fled a fire which engulfed a second story property but were hampered by badly trained staff and inadequate fire exits. A fire alarm was also turned off and shoppers allowed to complete their purchases, oblivious to the danger above. When they did flee, they fell over each other and some were hit by shards of red hot shattered glass from above.

In November 2013 (and reported by ThisWeekinFM at the time), Oxford Street was again forced to close as a building under renovation caught fire. The closure is said to have cost retailers hundreds of thousands at a time when the sector was at rock bottom.

A replica hand grenade was found at Ashton Retail Park in Manchester on June 28.

At around 11:00am police were called to reports that a suspicious item had been found at the Barnardos shop. Emergency services and bomb disposal officers attended and a number of shops were evacuated.

The bomb disposal officers established it was not a genuine device and it was been taken away.

Inspector Paul Smith of Greater Manchester Police's Tameside Borough, said: "I'm pleased to say that once the situation was over it was business as usual for retailers and shoppers alike.

"We responded quickly and effectively to negate any threat to people in the local area but thanks to an assessment by bomb disposal officers, I was able to confirm the device found was not genuine and did not pose any risk to people's safety."

Fifteen fire engines and around 95 firefighters and officers were called to a fire at a school in Hackney in London on Wednesday 5 night.

The basement, ground floor and first floor were gutted in the fire as well as a small part of the second floor in the three and four storey building.

There were no reported injuries.

Station Manager Nicola Lown, who was at the scene, said: "The ground floor partially collapsed into the basement leading to hazardous conditions. The equipment from two fire rescue units were was used to shore up the ground floor. This enabled crews to wear breathing apparatus to gain better access to the fire in the basement."

Sunday July 2 saw 80 firefighters tackle a fire at building under construction on London's Bow Wharf - a stones-throw away from West Ham United former stadium home and a development area for workers at London's Canary Wharf and Docklands. Two aerial appliances were required to fight the fire from above. The third floor and roof of the four storey residential block were badly damaged. The fire was visible from some distance and over forty 999 calls were made.

Firefighters had tackled a fire at the University of St Andrews in Scotland as this story was published (3:25pm July 6). It took three-and-a-half hours for 20 firefighters and appliances to control and extinguish the blaze within a  four storey block which broke out at just after 2:00am. The fire ignited within a mechanical extraction system. There were no injuries according to the Scottish Fire and Rescue Service.