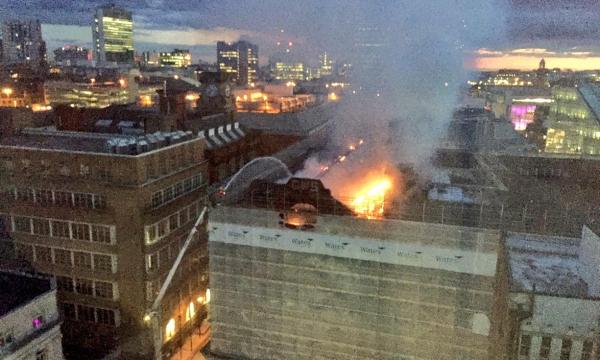 The fire seems to have been confined to the roof of the property that is under renovation by Wates Construction.

The fire was reported to the Greater Manchester Fire & Rescue Service at about 5:00pm and eight appliancs and crews were involved. A drone was deployed as part of the operation to fly over the scene and pick up on heatspots and transmit images to the ground. No injuries were reported. The building was unoccupied.

The affected building is part of an £800m project to develop offices, housing and shops in the area.

The Manchester Evening News reported one firefighter who had observed the scene from a cherry picker as saying: “When I got to the top, all I saw was a wall of flame, I couldn’t go into it. I had to go at it from the side. The roof is completely gone. It is burned and badly damaged.”

50 firefighters were on call for over four hours with crew scaled down in the evening to monitor the situation.

Picture: A fire has damaged the roof of the Grade 2 listed six storey former headquarters of the Co-operative Wholesale Society n Manchester