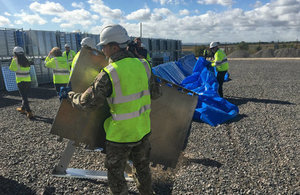 Teams across England experimented with new temporary flood barriers, pumps, vehicles and drones as part of Exercise Certus back in October.

The exercise was designed to test that the Agency was ready to respond more rapidly and flexibly to flooding following the Government’s National Flood Resilience Review (NFRR).

As well as new technology the Environment Agency awarded a 1-year contract to Stobart Group to store, track, and transport its 40 kilometres of temporary barriers and other mobile equipment. The contract will include use of the Stobart Group’s network of resilience centres, distribution centres and extensive fleet of over 3,000 trucks. Stobart will provide a 24/7 logistics support service throughout the year assisting the Agency before, during and after flooding.

The Environment Agency has also reached a key ‘winter ready’ milestone with all those communities affected by flooding last winter now having the same level of flood protection they had before winter 2015/16. This is a result of a £65m programme across the north of England, involving 20,000 inspections and around 650 repair projects, to restore flood defences or, as in the case of the Foss Barrier, significantly upgrade them.

Sir James Bevan, Chief Executive of the Environment Agency, said: "I’ve seen for myself the devastating impact that flooding has on lives and livelihoods. Our staff have already put a huge amount of work into helping communities recover from last winter’s floods and reducing flood risk to thousands of homes.

"Now we are rising to the challenge of responding to flooding as extreme weather becomes hits us and is becoming more common: In Exercise Certus our teams have been training with new kit, including flood barriers, pumps and vehicles so that we can respond more rapidly and flexibly."

At the time of the exercise, Floods Minister Thérèse Coffey said: "This proves we have the ability to move quickly to provide support around the country in the event of a flood this winter. Our £2.5 billion investment programme will better protect 300,000 properties against flooding for the long term and with new high volume pumps, four times as many temporary defences as last year, and the Environment Agency able to move rapidly to help protect homes and businesses, we’re better prepared than ever before."

Other agencies on call

Flash Flood - Councils Aim to Save Every One of Us

With heavy and thundery showers forecast again for the coming month, the Local Government Association (LGA), which represents more than 370 councils in England and Wales,...