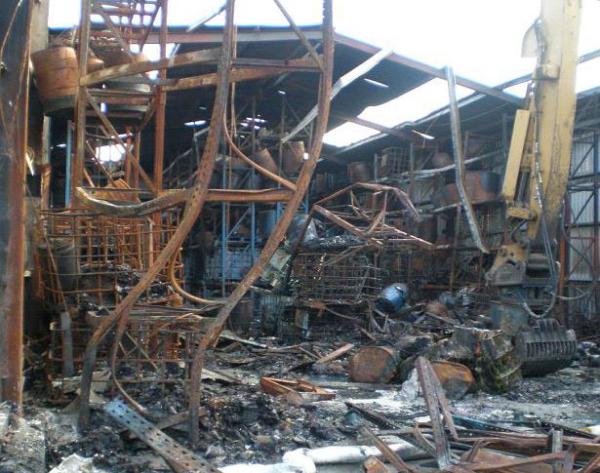 Personnel Hygiene Services (PHS) Ltd was fined last Friday after a major explosion at a waste management site. The company was prosecuted by the Health and Safety Executive (HSE) following the blast at Burscough Industrial Estate. Disgracefully, not only has it taken since the incident happened on 12 October 2010, for it to come to court but despite a substantial fire-fighter presence and nearly 60 police officers being called to attend, fines and costs only amounted to  £150,000. Furthermore, three employees were seriously injured.

The explosion occurred when aerosol cans were put into an industrial shredder. Liverpool Crown Court heard that three employees working near the shredder were caught in a fireball and surrounding buildings had to be evacuated while firefighters dealt with the resulting blaze.

Nearly 60 police officers were deployed to oversee road closures and control a cordon around the site, whilst a thick cloud of smoke developed above the fire and was seen drifting from Burscough towards Southport. There was also extensive damage to the large warehouse that housed the shredder.

A joint investigation by the HSE and the Environment Agency found the company had allowed around 150 cans containing extremely flammable substances to be put into a large shredder at the site on Tollgate Crescent.

The investigation found that PHS did not have a procedure for checking the contents of boxes of waste materials delivered to the site. The company also failed to ensure that a chemical specialist monitored the waste being put into the shredder to check for flammable substances.

Finally, a risk assessment carried out in April 2010 was found to be wholly inadequate after the company wrongly identified the risk of aerosols being added to the shredder as being 'very unlikely' and the consequences of this happening as 'moderate' meaning no action was taken as a result.

Speaking after the hearing, HSE Principal Inspector Neil Rothwell said: "The chemical waste industry has the potential to be extremely hazardous. PHS could and should have done more to protect the lives of its employees and the public.

"The explosion and fire led to three workers being seriously injured and caused considerable disruption in the local area.

"The issue of waste materials being wrongly labelled is well known in the industry, so PHS shouldn't just have assumed it could add cardboard boxes to the industrial shredder without first checking what was in them.

"It could easily have made sure boxes were opened before they were put in the shredder. If it had, then the explosion and fire could have been avoided."