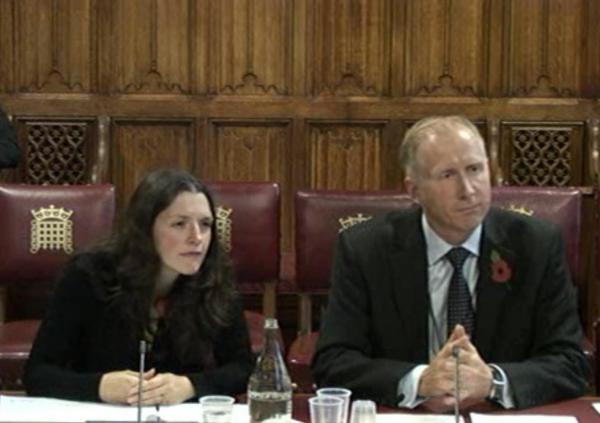 A House of Lords EU committee report has called for urgent action on food waste in Europe. It was published on Sunday (6 April) and among its recommendations was a clear message to not let the complexity of food waste monitoring and definitions delay action.

Sodexo’shead of waste management Claire Atkins-Morris and environmental manager Paul Bracegirdle (both pictured) gave evidence to the committee in November (as reported in TWinFM) and highlighted the challenges faced by the industry around monitoring and definitions.They advocated the use of standardised guidelines and aspirational targets to encourage food waste reduction. The experts were the only foodservice company representatives to appear before the House of Lords Agriculture, Fisheries, Environment and Energy sub-committee, which took evidence from industry leaders and retail bodies over a three-month period.

According to the European Commission, the foodservice and hospitality industry accounts for 14 per cent of food waste in the EU. This week’s report feeds findings and recommendations back to Brussels on draft legislation to reduce food waste by 50 per cent across member states by 2020.

Sodexo is a founding signatory of the UK Hospitality and Foodservice Agreement, which was launched by the Waste and Resource Action Programme (WRAP) in June 2012 on behalf of the Department for the Environment, Food and Rural Affairs (Defra). The agreement aims to cut food and packaging waste by five per cent – or approximately 100 million meals – by 2015 and increase the rate of food and packaging waste recycled, sent to anaerobic digestion or composted to 70 per cent. Sodexo also makes a commitment to reducing food waste through its global sustainability strategy the Better Tomorrow Plan.