For SuDs that do Wishes 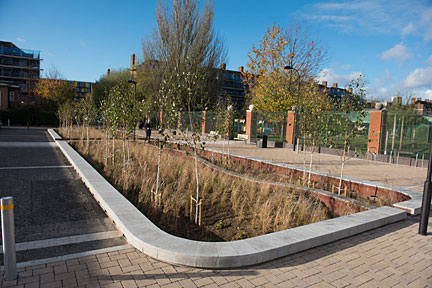 Work on two new Sustainable Drainage Systems (SuDS) schemes in the London Borough of Hammersmith & Fulham will begin in the New Year.

In a month of dreadful flooding in the North of England, ways of controlling vulnerable areas continue in London with the opening of Bridget Joyce Square in White City earlier this month and two further SuDS schemes in Melina Road, Shepherd’s Bush and Mendora Road, Fulham in January 2016.

The two projects which are funded by Thames Water, will protect residents against surface floods by retaining water during heavy rainfall and preventing it from entering and overloading the combined sewer system.

“These are important schemes that help alleviate the risk of flooding in an environmentally conscious way,” stated said Cllr Wesley Harcourt, Cabinet Member for Environment, Transport and Residents’ Services, Hammersmith & Fulham. “At the same time, by including features such as rain gardens, they can also create great new spaces for residents.”

The two roads have been chosen as pilot schemes to help best understand the benefits of SuDS schemes so they can be introduced elsewhere to best effect. Work on both schemes will require phased road closures and parking suspensions while they are constructed.

The Melina Road project is scheduled to last 12 weeks and Mendora Road, 30 weeks.

Picture:    The Australia Road SuDs scheme in the London borough of Hammersmith & Fulham

An extension to the Dame Kelly Holmes Sports Centre at Farnborough Sixth Form College to provide additional facilities for students has had column casings...