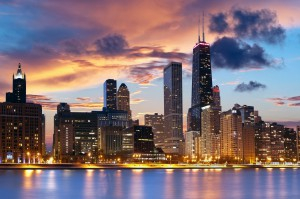 Plans are underway for the construction of a fabulous new riverside complex in Chicago’s South Loop area.

To be built in one of the biggest vacant tracts of land in Illinois’ most populous city, it will see the owner of the property, General Mediterranean Holding, joining forces with Chicago-based developer, Related Midwest.

The 62-acre South Loop site runs along the Chicago River and will be big enough for a mixed-use project that could include several thousand homes and a major shopping centre along Roosevelt, its main retail strip.

“It's a fabulous site,” declared Joseph Antunovich, President, Antunovich Associates, a Chicago architectural firm. “There's room to transition beautifully into Chinatown but also bring the emphasis back to the river.”

Any project would require a large investment in roads, sewers and other infrastructure and developers would need to seek major Tax Increment Financing (TIF) from the city.

Picture: Chicago, Illinois, will have an ambitious major development for its South Loop area.

If we are stronger together, what does a facilities professional do when they cannot find an organised means to make local connections that will benefit them in their...