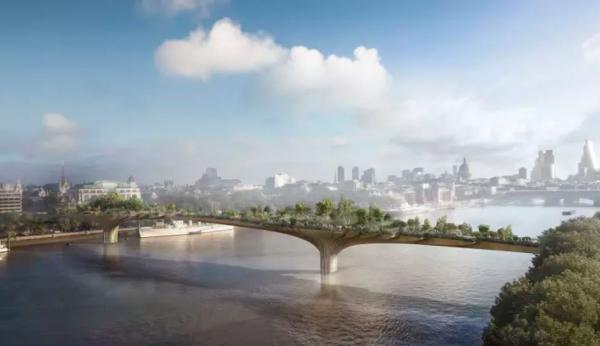 The Garden Bridge Trust, the charity established to build and run the proposed Garden Bridge in central London, announced this week ending Aug 18 that it will be winding up the project.

It has informed the Mayor of London, as well as Transport for London (TfL) and the Department for Transport, who have both allocated public funds to the project, of its decision.

A statement sent to ThisWeekinFM which has followed the story since the idea was first muted, read: 'The Trust has had no choice but to take this decision because of lack of support for the project going forward from the Mayor.

'On 28 April, Sadiq Khan wrote to Lord Mervyn Davies, Chairman of the Garden Bridge Trust, stating that he was not prepared to sign the guarantee for the annual maintenance costs of the Bridge, a condition of planning consent, despite previous assurances given about his support for the project.

'Since then the Garden Bridge Trust has examined in detail all options available to it. This included discussions with a potential benefactor who was keen to provide the required guarantee. It also had further discussions with the Government. Unfortunately, the benefactor concerned and the Trustees have all concluded that they cannot proceed with what was always designed to be a public project in the heart of the capital without the support of the Mayor of London'.

Lord Davies from the Trust said: "It is with great regret that Trustees have concluded that without Mayoral support the project cannot be delivered. We are incredibly sad that we have not been able to make the dream of the Garden Bridge a reality and that the Mayor does not feel able to continue with the support he initially gave us. We had made great progress obtaining planning permission, satisfying most of our planning conditions and we had raised £70 million of private money towards the project.

"The Garden Bridge would have been a unique place; a beautiful new green space in the heart of London, free to use and open to all, showcasing the best of British talent and innovation. It is all the more disappointing because the Trust was set up at the request of TfL, the organisation headed up by the Mayor, to deliver the project. It is a sad day for London because it is sending out a message to the world that we can no longer deliver such exciting projects."

The Garden Bridge project will now be formally closed. This includes terminating contracts, and concluding donor funding agreements. The Trust itself will then be wound up in accordance with the Companies Acts.