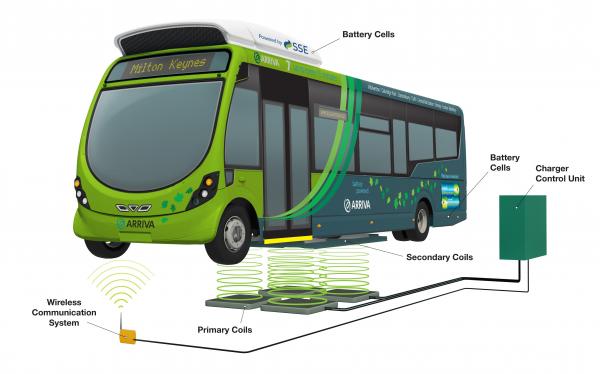 A fleet of eight electric buses will run on the Number 7 route that is 25km long and runs between the Milton Keynes suburbs of Wolverton and Bletchley, serving an estimated 800,000 passengers every year.

If successful, it will be introduced on other routes – and prove an alternative viability for electric vehjicles per se. The system operates by ‘inductive charging’. Electricity passes through wire coils in the road plates, generating a magnetic field. This field induces a voltage across coils in the bus plates and the vehicle's batteries are charged. The bus only needs 10 minutes of charging at the end of the route before continuing. The fleet is recharged overnight at the depot.

"Electric buses have huge potential and we're exploring how they can help us take better care of the environment without compromising passenger service," explained John Bint, Milton Keynes Council.

Buses using similar systems are already in use Turin and Genoa in Italy, Utrecht in the Netherlands and in Mannheim in Germany.

The problems of range have long dogged the potential for electric vehicles, along with power recharge facilities. However, there are novel ways of overcoming these issues.

One is in Korea, where a 12.5 mile stretch of road has been opened that recharges electric vehicles driving over it, without needing them to stop at all.

The Mazda Motor Corporation has announced (week ending Aug 11 its vision for technology development that looks ahead to the year 2030. Under the heading (first used in...