Get Your Heads Set for Better Mobility 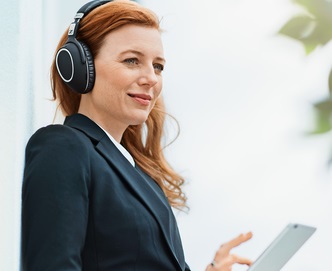 Mobility is increasingly important in the modern office, offering a range of benefits from decreased commuting and flexible work schedules to improved communication and personal productivity. But this flexibility could be far more important than comfort and convenience says Sennheiser, a provider of headsets and speakerphones.

A new research paper published in The Lancet suggests the World Health Organisation’s previously recommended 150 minutes of exercise a week may not be enough. Experts found that those who sat for eight or more hours per day, common in many offices around the world, saw a 30% increased risk of dying during a follow up period of 2 to 18 years than those who sat for less than four hours and spent one hour active each day. The message is clear – getting up and staying active daily is a vital part of staying healthy.

Fortunately this is something that’s being acknowledged by more and more companies in the UK, and awareness generated by events such as Vitality’s Britain’s Healthiest Workplace can only help to raise awareness of the importance of employee health and wellbeing. But for some workers these goals can be difficult to achieve, with many associating with ‘being tied to a desk’ in order to hit targets and effectively communicate with clients and customers. Fortunately, modern technology is able to add increased mobility to any workforce without affecting productivity, ensuring that these issues can be addressed.

“The risks associated with a sedentary lifestyle are not new, but this research puts an added emphasis on finding ways to remain active every day, especially for office workers,” said Jane Craven, Sales Director, Sennheiser Telecommunications. “Many may think they don’t have the time to take these sorts of breaks, but there are a number of ways modern headsets and a change of habits can help.”

One option is to consider opportunities to build exercise into a working day while remaining in touch through a headset. This might include parking a little further from the office, taking a full lunch break rather than eating at a desk, and walking around the office and between departments rather than being reliant on emails and phone calls to communicate.

“Modern forms of communication now make it far easier for people to stay in contact without being tied to a desk,” Craven continued. “For example, a Bluetooth headset can seamlessly switch between softphone and mobile, allowing someone to initiate a call and stay connected while moving around both in and outside of the office.”

And it’s not just physical exercise that’s important – a further study co-commissioned by Public Health England stresses that office workers should spend a minimum of two hours, and ideally four hours, on their feet at work. The study’s authors called for changes in the workplace to encourage standing, such as sit/stand desks, but so far take up has been slow in the UK.

“Even for employees who have no call to leave the office as part of their work, there are opportunities to adopt a healthy lifestyle simply by standing and moving around the immediate area,” said Craven. “Wireless headsets or wired headsets with dual-connectivity offer far more freedom than tethered models, and can help to actively discourage people from sitting for an undue length of time. Mobility has an important role to play in helping people to stay in touch on the move, but also in staying active without affecting productivity.”

Last week, the British Institute of Facilities Management published new guidance on managing the transition to agile working which aims to fill the knowledge gap...

The Computer In Your Pocket Revolution Arrives

A portable workstation that allows organisations to expand their workplace beyond traditional boundaries has been launched. The tVolution Mini, by Becrypt, is claimed...