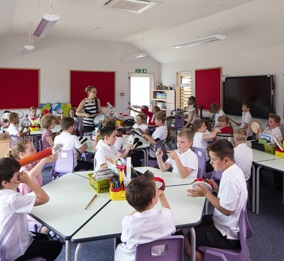 Scotts of Thrapston in Northamptonshire have 95 years’ expertise in the equestrian and garden buildings sector but recently decided to try and break into the education sector by supplying modular classroom buildings.

It specified 153 of Fermacell’s 1,200mm x 2,400mm x 12.5mm boards for its first such project – Weldon Church of England Primary School, in its home county. (Since then Scotts has also used Fermacell for another school and an office building.)

The Fermacell panels were used to line the walls and ceilings of a £175,000 replacement for a 20-year-old modular building at Weldon in Corby, where pupil numbers have doubled to 200 plus in over 40 years and have been used throughout the classroom, group room, lobby, toilets and storeroom.

The 18.5m x 6.5m building which is also clad in timber and roofed in coated steel profiled panels, was constructed as a flat pack over two weeks at Scotts’ production facility in Thrapston, transported by truck to Weldon and erected by a team of four men using an all-terrain fork lift truck in six weeks during term time.

Picture: Fermacell boards were used to good effect by Scotts of Thrapston at Weldon Church of England Primary School in its first venture into the education sector

A stunning concrete effect feature wall for a chain of exclusive estate agencies in London has been achieved by Aliva UK. Brinkley’s Estate Agents, that has...

Getting Floored in Office Environment

Workplace interior design company TheJones London completed a project for Ziff Davis and opted for Country Oak from Moduleo’s Impress collection as the colour and...