Getting on Your Bike 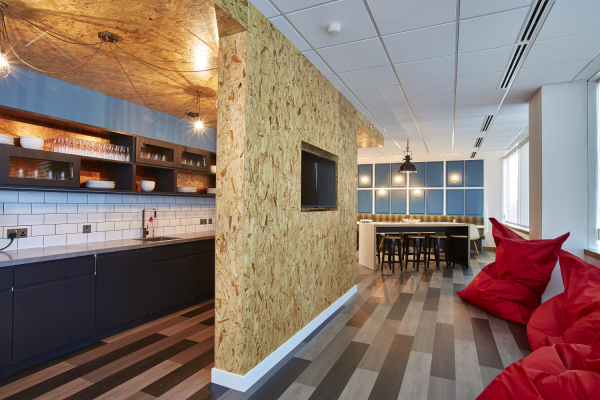 Motorcycle insurance specialist Bennetts had a strong opinion about creating a fresh and striking working environment that would appeal to current staff while also offering the company room for future growth.

Bennetts, which specialises in motorcycle insurance has been based in Coventry since its beginnings in 1930 and was purchased by the Saga Group earlier this year for more than £25 million.

There were specific requirements to strongly enforce its brand as well as use motorcycles and parts of bikes within the office to cement the core business purpose. Additionally, Bennetts did not want the office to feel like a corporate space; it was designed to be fun, flexible and 'future-proofed' for growth and changes in technology .

Head of group property for Saga PLC (the parent company), Gavin Davis worked with the Overbury team to translate the brief into a well designed office which was delivered on a tight programme and within a reportedly modest budget. The new office at Sherbourne House on Manor House Drive, in the heart of Coventry, is being promoted as a testimony to the skill of the design and fit out team of Overbury.

According to project designer Hannah Holmes, the scheme was one of the most creative the Overbury team in the central region had tackled. “With the full-height glass screens and large digital wall coverings as well as a history wall and the adornment of motorbike paraphernalia throughout, this is a fit out that is supremely functional but also lots of fun.”

Bennett's reports that since the move staff engagement and productivity has improved, demonstrating the benefits of an office that is properly designed and laid out.

Picture: The new Bennetts’ offices in the centre of Coventry have delivered in terms of design and even productivity

Saracen Interiors has completed an office fit-out in Edgware for Japanese sauce company, Nihon Shokken. The £65,000 fit out covered 4,000 square foot of...

Claiming to be the UK’s largest supplier of recycled and refurbished modular buildings, Foremans now has the largest selection of previously owned Portakabin...

Tengbom has been invited to compete in two international competitions in China and has been nominated in three categories at the World Architecture Festival Awards...