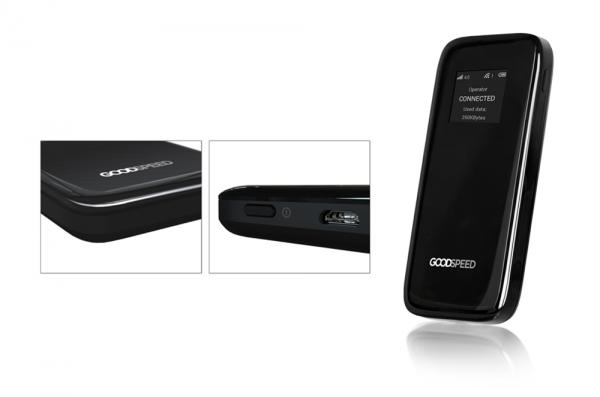 An agreement has been reached by Uros with ZTE to launch its 4G system on the global market.

The device will be manufactured under a technology licence from Uros.

The MF900 supports all global cellular technologies – LTE FDD, LTE TDD, UMTS, EDGE and GSM – over a global set of bands and can reach maximum downlink speed of 150Mbps and uplink speed of 50Mbps.

The new MF900 mobile hotspot features a 3,200mAh battery that allows for approximately 12 hours of continuous use, or seven days in standby mode. It is claimed that the device is the world’s first commercially available 4G hotspot that can accommodate and switch automatically between 10 SIM cards. The private WLAN connection can be shared with up to 15 Wi-Fi-enabled devices simultaneously.

The new 4G device will be available for purchase in July from Goodspeed direct sales channels, including Business Sales and official Goodspeed distributors, before general availability from www.goodspeed.io

Picture: An agreement has been reached between Uros and ZTE to launch the former’s global 4G system internationally

BT must open up its network so competitors can connect fibre to homes and offices and it must reform Openreach to serve UK consumers and businesses better, says...

Finnish based Wi-Fi hotspot provider Uros has added the Netherlands to its Goodspeed mobile internet service coverage. The move brings the total number of roaming-free...