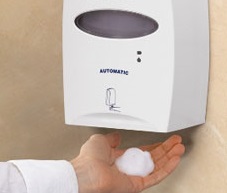 Two in five office workers have used another part of their body to exit the toilets at work to avoid getting germs from colleagues on their hands.

The findings are to be found in a survey commissioned by Kimberly-Clark Professional.

It examined 303 office workers across England and revealed that most people who use another body part to open the toilet door at work used their elbows (57%), while using a single finger or a foot (both 29%) were equally the second most used methods. Other respondents admitted using their bottoms, shoulders and knees – suggesting there is a hidden workforce of contortionists in Britain’s offices.

The results reflect the fact that many office workers suspect their colleagues do not wash their hands after using the toilet. In total, 56% of respondents said they worried this was the case and 72% believed that if their colleagues did not wash their hands routinely at work, it could cause them harm. In addition, when asked where they thought germs were most likely to lurk in the workplace, 78% cited the office toilets with 69% mentioning toilet door handles.

Kimberly-Clark Professional recommends that the careful positioning of hygiene products in the office and washroom will encourage people to use the products to stay healthy while at work. There are a number of germ hotspots throughout the office, e.g. break out areas, meeting rooms, reception areas and entrances that can be a breeding ground for germs.

A clean, hygienic washroom with fully stocked dispensers is a minimum expectation from employees, who believe their office washroom facility says how much their company values them. In fact, research suggests that 73% of people in the business community believe a bad toilet environment indicates poor overall management.

“Our research shows the presence of germs in the workplace is a significant concern for office workers and that many go to great lengths to avoid getting harmful bacteria on their hands,” explained Suzanne Halley, Segment Marketing Manager, Kimberly-Clark Professional. “Fortunately there are some straightforward steps companies can take to create an environment in which people will be focusing on business rather than the risk of catching illnesses. Raising awareness about hygiene in the workplace is critical and we can help support this by encouraging employees to wash and dry their hands regularly and keep their workspace clean.”

Picture:   Research carried out by Kimberly-Clark shows that many people believe that hygiene standards in the workplace falls short.

Gender Equality in the Washroom

Unisex toilets have become increasingly common at universities all over the UK and with the concept gaining in popularity throughout other institutions, facilities...

For Hands That Do

Paul Jakeway explains why workplaces should think beyond the provision of handwashing opportunities – and implement a structured skin care programme that keeps the...

Name Game is a Hazard

The Canadian owned Amor has issued a warning that many cleaning professionals now select ‘cleaner-disinfectants’ when performing cleaning tasks tackling...

Let Me Tell You a Little Secret

With the launch of World Toilet Day, SCA which owns well known hygiene brands like Bodyform, TENA, Plenty, Velvet, Cushelle and Tork, has offered what it believes is an...

Air that is Far From Fair

Recent US studies have found that the indoor air quality in offices can be two to five times worse than the air outside. The findings come from work led by Joseph...

Stop Being Sick of Winter Infections

Hand hygiene systems can make a huge difference in the workplace by reducing the chances of staff getting sick in the first place argues Mike Sullivan, MD of GoJo...

Mitsubishi has estimated that a typical office worker may wash his or her hands three to six times in a day or 750–1,500 times a year. It argues that the...

Being Fussy with those who are Messy

Offices that cut corners on cleaning, or allow employees to work in messy, disorganised surroundings can be ‘up to 72% less productive’ than clean,...