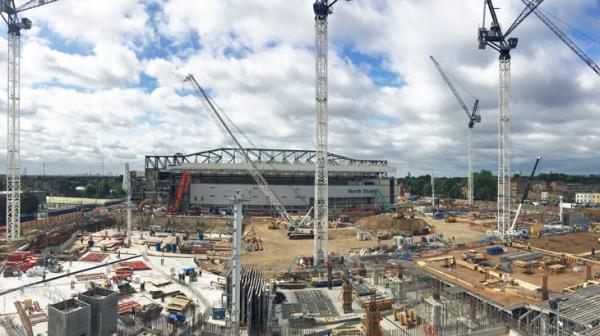 At lunchtime on Tuesday a man was finally talked down from a crane on the site of the new Tottenham Hotspur football stadium. After 18 hours, he was promptly arrested.

The man, who is known to the police, is said to have threatened to throw himself off the crane after he managed to climb it unimpeded at about 6:30pm on Monday evening - he had charged the gate of what is normally said to be a very secure construction site.

Police officers - including special negotiators - ambulance crews and firefighters were all at the scene as the man climbed back down - he was then arrested for trespass.

The crane was one of seven at the site operating at 100ft. Mace Construction is the main contractor. Neither Mace or Tottenham Hotspur PLC have made comment - but work was suspended at the site for a day.

Picture: Up the Spurs - a man has delayed building work at the new Tottenham Stadium for a day while police negotiators persuaded him not to jump