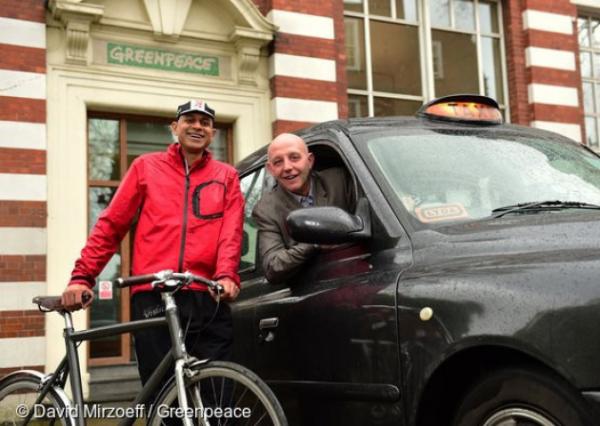 They may seem disparate groups but cab drivers and cyclists have joined Greenpeace to demand ‘real action’ on air pollution.

The alliance has been forged to highlight what is being promoted as the most exposed to London’s bad quality air in support of Greenpeace’s proposal for a Clean Air Zone in the capital.

The environmental organisation has pointed to a new survey that shows that 62% of Londoners would back such a scheme, including a strong majority of car owners. The results of a new poll, commissioned by Greenpeace noted that 51%  are ‘extremely’ or ‘very concerned’ about bad quality air. Further poll results show that 62% of Londoners would support the introduction of the wider, more comprehensive Clean Air Zone. The nfpSynergy survey also shows that 60% of car owners support the Clean Air Zone proposal.

Taxi drivers and cyclists are among the groups most exposed to dangerous and illegal levels of air pollution. The Clean Air Zone they are now backing would offer protection to many more Londoners than those who live or work in Zone 1 which Greenpeace describes as the ‘limited area’ covered by the proposed Ultra Low Emissions Zone that is due to come into force in 2020.

The two leaders met at the London headquarters of Greenpeace where they both signed a proposal for a large city wide Clean Air Zone that it is argued will phase out the most polluting vehicles off the roads and protect more Londoners from the impacts of air pollution.

“As cabbies, we are subjected to the worst of London’s poor air, driving around in illegal levels of pollution on a daily basis,” declared Steve McNamara, General Secretary, LTDA. “With congestion on the rise due to the spiralling number of private hire vehicles [minicabs], London’s air quality is only going to get worse unless clear action is taken.”

McNamara stated that black cabs were committed to cleaning up London’s air and would be emissions free in new vehicles from 2018.

Ashok Sinha of the London Cycling Campaign backed up the black cab organisation. “A comprehensive Clean Air Zone for London would protect everyone’s health, especially that of the capital’s children  as well as help fund the new Mini-Holland and Cycle Superhighway schemes that our Sign for Cycling campaign is calling for.”

Sinha  said the London Cycling Campaign stood united with Greenpeace and London’s cabbies in calling for the next Mayor of London to adopt a ‘win-win policy’ that would both save lives and make it safer and easier for Londoners to make many more of their journeys by cycle.

The statements were music to the airs of Greenpeace in its campaign on air pollution in London. “You know there’s something important going on when the two leaders of London's cabbies and cyclists come together and ask for the same thing,” concluded John Sauven, Executive Director, Greenpeace.

Picture:   Ashok Sinha of the LCC and Steve McNamara, General Secretary of the LTDA have joined forces with Greenpeace to campaign for better air quality in London (image courtesy Greenpeace)