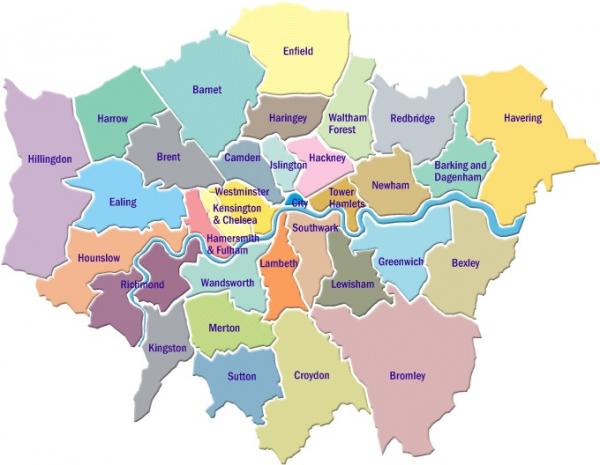 The London Borough of Hackney is seeking to appoint a term contractor to undertake works and some services for each of eight Lots of work – conservatively valued at £97million.

The minimum expected contract term is five years for Lots 1-7 and four years for Lot 8 – a £20million lift maintenance and replacement project. The £97million valuation does not take into account any potential contract extensions. Contractors may express an interest for one or for multiple lots. Much of the work on offer is for maintenance of domestic property. Hackney is bordered by Haringey, Islington, Tower Hamlets and The City of London – as pictured. It incorporates parts of Highgate and Hampstead Heath falls just outside. Though geographically not one of London’s largest boroughs, Hackney has a great deal of high density housing with many high-rise blocks.

TUPE may apply across some of the Lots.

Lot 1 consists of reactive general building repairs to occupied and unoccupied properties, including cold water tanks. It will be in support of the Hackney Homes Direct Labour Organisation. Valued at up to £23million.

Lot 2: Communal Works, including planned and responsive and civils and playground equipment works. Up to £10million.

Lot 4: Installation, servicing and maintenance of CCTV cameras to estates. Worth up to £4million.

Lot 5: Installation and maintenance of Controlled Access Door systems to blocks. Up to £6,2million.

Lot 6: Installation and Inspection and maintenance of Lightning Protection to blocks. Up to £2.1million.

Lot 7: Maintenance of digital aerials and installation if required to blocks. £830,000.

The contracts are not expected to commence before November 2014 and not later than April 2015.

Hackney has an ongoing policy of cracking down on businesses it suspects of paying less than the National Minimum Wage and works with HMRC in targeted operations – not only are businesses fined, they have to pay unpaid wages. The latest campaign focussed on half-a-dozen 24-hour supermarkets – two were caught out and may have to stump-up £14,000 in back-pay alone while another will have to explain PAYE and tax credit irregularities.

In the last two months, 46 businesses in total, in the retail and food sector were visited. “Jules Pipe, Mayor of Hackney said: “This joint operation has shown that a quarter of the businesses we visited were not paying the national minimum wage. Many also failed to meet the necessary trading standards and environmental health requirements which are in place to keep the public safe.

“We will also continue to work closely with the HMRC to find those employers continuing to flout the law by not paying their employees the legal minimum wage. Hackney Council will continue to work towards making Hackney a fair pay borough, where nobody is expected to do a hard day’s work for less than they can reasonably live on.”

Michelle Wyer, assistant director of HMRC’s national minimum wage team, said: “Paying the national minimum wage is not optional - it’s the law. It is unacceptable for employers to cheat staff and HMRC. Last year over 26,000 underpaid employees got back a share of over £4 million as a result of HMRCs actions.

"Where we find an employer ignoring the rules, we will ensure arrears are paid in full and the employer is fined. In the most serious cases, criminal prosecution can follow.”

Anyone who believes they are not being paid the national minimum wage can call the Pay and Work Rights Helpline t. 0800 917 2368

The London Borough of Hackney is seeking to appoint a term contractor to undertake works and some services for each of eight Lots of work – conservatively valued at...

Marco Beverage Systems, a global leader in manufacturing water and coffee brewing systems, has announced the release of POURŌĆÖD: a cold coffee dispense unlike anything seen before. Click Image To Read More

As the country continues to ŌĆśunlockŌĆÖ, we are hoping e-commerce will start to return to normal, with many employers bringing their employees back to the workplace. Click Image To Read More

RinnaiŌĆÖs N Series range of hot water heating units and systems have been fully certified to the new UKCA standard, the successor to the CE mark. Click Image to Read More