Half a Circus, Quakers and Shops 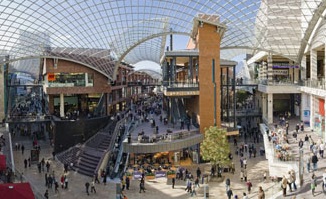 Bristol AXA Real Estate has exchanged contracts with Land Securities to acquire a 50% stake in Bristol's Cabot Circus shopping centre, Quakers Friars and surrounding shops (on behalf of its clients), for £267.8million.

The assets currently produce a net rental income of £17.3million to Land Securities.

Cabot Circus was developed by Land Securities in a joint venture with Hammerson PLC and opened in 2008. Cabot Circus comprises a 830,000sq.ft covered shopping centre, Quakers Friars a 170,000sq.ft luxury goods and dining quarter, and 370,000sq.ft of adjoining high street shops. The development was hailed as one of the largest retail-led city centre urban regeneration projects in the UK and won accolades for its integration into the city centre and delivery of much needed amenities, public spaces and improved transport to the city.

Scott Parsons, Managing Director, Retail at Land Securities, said, “The sale of Cabot Circus, Quakers Friars and surrounding high street shops, coming so soon after the disposal of The Bridges in Sunderland and the acquisition of Bluewater in Kent, demonstrates the pace at which Land Securities is reshaping its retail portfolio. This reshaping is set to continue to reflect evolving consumer behaviour.”

The sale is conditional on EU merger control approval.

If the London shoppers heading to Oxford Street’s Primark had looked up from their mobile phones for just a minute, they might have noticed the tired West End...

Savills and Deloitte Real Estate have been jointly instructed to sell The Gherkin at 30 St Mary Axe in the City of London following the appointment of Phil Bowers,...

In the first deal of its kind with a retail landlord, Regus Express sites are opening at Meadowhall in Sheffield, Broughton Shopping Park in Chester and Fort Kinnaird...