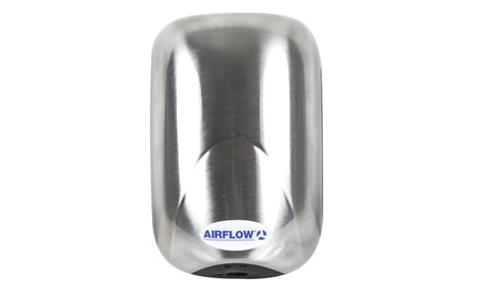 The ecoDry mini hand dryer which has been designed for installation in commercial and industrial washrooms with limited space has been launched by Airflow Developments.

Claimed to consume minimal energy, the ecoDRY mini reportedly has a smaller footprint than a standard sheet of A4 paper.

As an unobtrusive option for washrooms and bathrooms, the hand dryer encompasses the same visual features as the company’s existing ecoDry units but is said to be ‘considerably smaller’, protruding from the wall at less than 10cm.

Available in white and satin chrome finishes, the unit has also been fitted with a contemporary LED blue down lighter.

ecoDRY comprises a 500W heating element which draws upon a 400W motor and makes use of a 2.3W per drying cycle. This allows owners to save on running costs as well as providing a unit with an air speed of 200Km/h and an air flow rate of 110m3/hr/ 31 l/min, a noise level of only 70dB(A) and a reduction of carbon emissions.

Replaceable HEPA filters and carbon brushes can also be specified to protect users from up to 99% of air bacteria.

Mitsubishi has estimated that a typical office worker may wash his or her hands three to six times in a day or 750–1,500 times a year. It argues that the...

Oh Dear What Can The Matter Be, 400 Days Stuck In The Lavatory

We spend 400 days in a washroom over our life-times, writes Neil Court. Shouldn’t it be a good experience when we go? Well maintained public washrooms have...

Intel on the Washroom Sector

Savortex has teamed up with Intel to launch the adDryer, the world’s first smart and revenue share producing hand dryer for the corporate washroom sector. It...

Cummins - Very Pleased to See You

Savortex, for its IoT and advertising hand dryers and Augean Integrated Services for its food waste service, have both been given Successful Innovator status by...

BICSc has announced the launch of BICSc Roadshows; a brand new series of events for 2016. The Roadshows will be touring across the country from May to November offering...