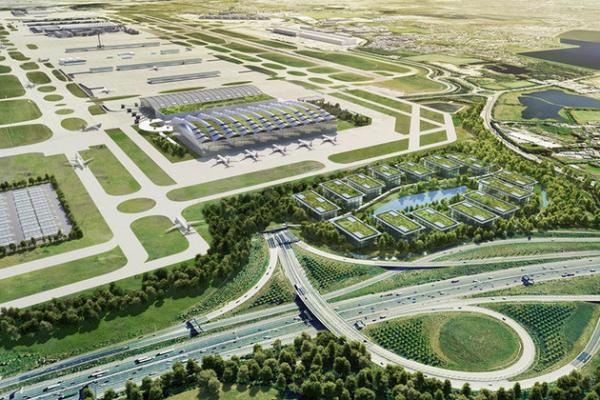 After 16 years of dilly-dallying by three different Governments,  this one finally gave the go-ahead to a further round of dilly-dallying that is expected to lead to the expansion of Heathrow Airport - and the building of a third runway...the first full length runway in the South-East since the second world war.

Only the Heathrow scheme will now be taken forward in the form of a draft ‘National Policy Statement’, meaning the Government’s decision on its preferred location, will be consulted on in the new year. A Department of Transport spokesperson said: "This is just one of a series of major infrastructure investments that will create jobs and opportunities for every part of the UK."

Transport Secretary Chris Grayling said: "This step is truly momentous. I am proud that after years of discussion and delay this government is taking decisive action to secure the UK’s place in the global aviation market – securing jobs and business opportunities for the next decade and beyond."

According to Grayling, a new runway at Heathrow will bring economic benefits to passengers and the wider economy worth up to £61 billion. Up to 77,000 additional local jobs are expected to be created over the next 14 years and the airport has committed to create 5,000 new apprenticeships over the same period.

Grayling also confirmed yet another round of delays: "This is an important issue for the whole country. That is why the government’s preferred scheme will be subject to full and fair public consultation. Of course it is also hugely important for those living near the airport. That is why we have made clear that expansion will only be allowed to proceed on the basis of a world class package of compensation and mitigation worth up to £2.6 billion, including community support, insulation."

Paying for the building

Expansion costs will be paid for by the private sector. The Government has said it will be for the Civil Aviation Authority, as the independent industry regulator, to work with Heathrow Airport Ltd and airlines operating at the airport, on the detailed design and costs to ensure the scheme remains affordable.

Heathrow’s scheme includes plans for improved public transport links and for an ultra-low emissions zone for all airport vehicles by 2025. The government will make meeting air quality legal requirements a condition of planning approval. The Department for Transport has also set up a working group with Her Majesty’s Treasury and the Department for the Environment Food and Rural Affairs on air quality. This is part of a 10 year project to accelerate improvements in air quality.

People with homes subject to compulsory purchase will receive 125% of full market value for their homes, plus stamp duty, legal fees and moving costs.

Airport expansion will be delivered through the faster planning process, under the 2008 Planning Act and 2011 Localism Act.

Heathrow is one of the most experienced infrastructure delivery companies in the UK having spent £11bn over a decade to transform into the best hub airport in Europe.   This included a new Terminal 2 and Terminal 5, the latter of which has been voted by passengers as the best in the world four years in a row. John Holland-Kaye, Chief Executive of Heathrow Airport said: “Today, the team at Heathrow start the important work to deliver the vital new runway that the UK needs to compete in the world. A new runway will open trade routes and create jobs up and down the UK. Heathrow will play a key role in making our country stronger and fairer for everyone."

Chris Grayling is said to be considering a plan for the new runway to be built in part, over the M25 rather than making plans to tunnel the London Orbital Motorway under the runway.

Picture: Heathrow runway 3 - on a fast-track or just pie in the sky?