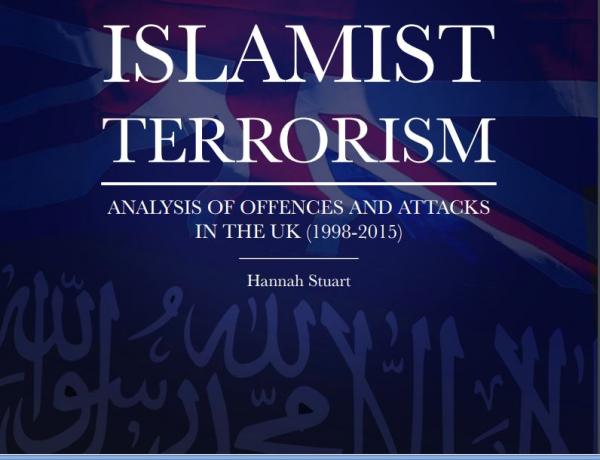 Islamist Terrorism an Analysis of Offences and Attacks in the UK (1998-2015) is a new research project from The Henry Jackson Society - the right-wing, pro-democracy via military strength organisation

Authored by Katie Parrett, it presents her view of the threat from Islamism-inspired terrorism in the United Kingdom. Below are the edited highlights of the Executive Summary.

Islamist terrorism remains the principal terrorism threat to both the UK and British interests overseas. At the start of 2017, terrorism directed, approved or inspired by Islamic State posed the predominant threat to national security, while al-Qaeda and affiliate groups continue to aspire to attack Western interests.

For more than two decades, militant Islamist groups have successfully recruited UK-based individuals for terrorist facilitation and training overseas, as well as directed or inspired involvement in terrorism at home.

The report identifies and profiles all Islamism-inspired terrorism convictions and suicide attacks in the UK between 1998 and 2015 in order to provide detailed information and statistical analysis on the manifestation and development of the threat to British national security.

Statistics include offenders’ background information, types of offences, roles and targets as well as the prevalence of links to terrorist networks and travel for terrorist purposes, including training and combat experience.

Diversity of threat and type of attack

Four categories reflect the type of terrorist-related activities engaged in, the immediacy of the threat and the intent of the individual. Among these offences (some of which included multiple types of attack), bombing was the most common.

Proportionally, offences involving beheadings or stabbings (planned or otherwise) increased eleven-fold across the time periods, from 4% to 44%.

There have been two suicide attacks on British soil – the 7/7 attacks in London and the 2007 Glasgow airport car bombing – in which five offenders were killed.

All convictions (as well as those killed in suicide attacks) are collectively referred to as Islamism-related offences (IROs). Reflecting the shifts in global Islamism-inspired terrorism following both the death of Osama bin Laden in May 2011 and the uprisings known as the Arab Spring, particularly the ongoing conflict in Syria and Iraq which began that year, data is also shown comparing convictions resulting from arrests between 1998 and 2010 with those resulting from arrests between 2011 and 2015. IROs which may be considered serious attack-related offences have been further compared with all other offences across key points of data.

While IROs are primarily committed by young men, women’s involvement in terrorism has increased; overall, offenders are getting younger. Eighteen women have been convicted of a terrorism offences ranging from supportive offences such as assisting an offender to serious attack-related offences such as attempted murder.

Forty-six per cent of 2011–2015 offences were committed by individuals aged under 25.

Nationality, ancestry and place of birth

Based on the official measure of relative deprivation in England (Index of Multiple Deprivation 2015), almost half (48%) of (English residence) IROs were committed by individuals living in the most deprived 20% of neighbourhoods nationally, commonly referred to as 'highly deprived'.

There is little correlation between involvement in terrorism and educational achievement and employment status where known.

While IROs were mainly carried out by individuals who were raised as Muslim, one in six offenders was a convert. Sixteen per cent of IROs were committed by individuals known to have converted to Islam prior to their offending. This is more than four times higher than the estimated proportion of converts among the Muslim population at national level.

Seventy-six per cent of IROs were committed by individuals who were previously known to the authorities through one or more of eight identifiable points of contact. Almost half (48%) of IROs were committed by those who were already known to the Security Service (typically through surveillance or as a peripheral associate during previous investigations). Thirty-eight per cent of IROs were committed by individuals with previous criminal convictions (26%) or a history of police contact, including prior investigations, arrests and charges that did not result in a conviction or control order/TPIM (12%). Previous convictions were for a variety of offences – most commonly public disorder, theft-related, terrorism, assault, drug-related and offensive weapons or firearms offences. Over a third (36%, 9% overall) of previous convictions were for extremism- or terrorism-related activities; and almost half (46%, 12% overall) of individuals with prior convictions had previously received a custodial sentence. Other prior contact includes known public engagement in extremism-related activism (13%); being stopped or detained in relation to (suspected) travel for terrorist purposes (9%); known contact with the government counter-radicalisation programmes Prevent and Channel (5%); known mental health issues (4%); immigration offences/intended deportation or extradition (4%); and regulatory or financial investigation or sanction (1%).