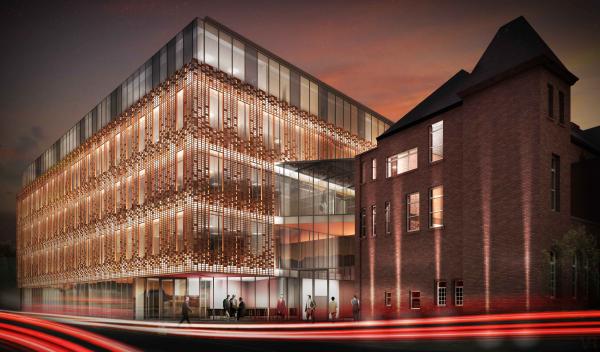 A stunning glazed atrium, glass bridges and curtain walling should bring together a grade II listed building with a brand new biomedical centre of excellence on the site of the former Royal Eye Hospital in Manchester.

The Advanced Facades division of Saint-Gobain Group company, GlassSolutions, has won the £2.5 million glazing design contract for the Citylabs building, which is part funded by the European Regional Development Fund.

The 94,000sq ft development will retain the heritage listed frontage, while building new space to the rear, which has been designed to attract bio health companies to develop new products and services within BREEAM Excellent office, laboratory and networking space.

The specification includes floor to ceiling Schuco curtain walling for improved thermal performance and to achieve a ‘U’ value of 0.87Wm2K. For a modern look and all-glass appearance a Spiderglass bolted system will be used on two elevations which form the entrance to an internal atrium. An architectural and practical feature of the development is an external maintenance walkway on each of the four storeys of the new building. An aluminium ‘veil’ will provide access to the outside of the building and also act as brise soleil solar shading which will reduce glare and overheating in the building.

The project is due for completion in Summer 2014.

Dumfries and Galloway Acute Gets Go Ahead

A consortium including Laing O’Rourke, have achieved financial close on a project that will deliver a new acute district general hospital for the Dumfries and...

High Wood Health, a consortium including Laing O’Rourke, has been confirmed as preferred bidder to build a new district general hospital for Dumfries and Galloway...