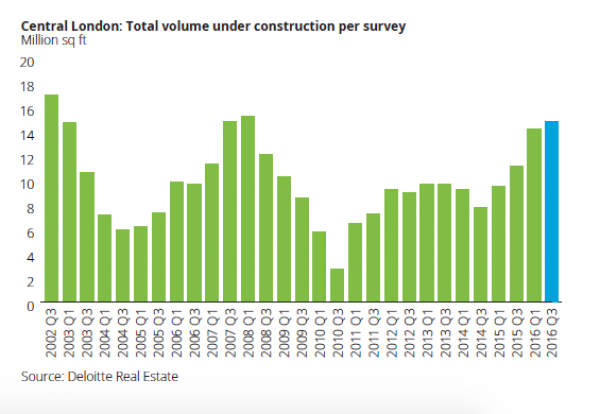 “Despite an increase in the overall volume of construction, the pace of development activity has slowed compared with our last survey six months ago” said Chris Lewis, head of occupier advisory at Deloitte Real Estate. “New construction activity is down 42% from the previous survey, which recorded the highest number and volume in our survey history.

“Interestingly, it is major office refurbishments, rather than new-builds, that are fuelling this latest wave of construction. Refurbishments account for 28 out of the 40 new starts and highlight the opportunity that developers can deliver into a market that still has low levels of available office space.”

Once again, the greatest number of new starts was in the City. Construction began on 14 new schemes, totalling 1.1 million sq ft, and increases the City’s development pipeline to 8.8 million sq ft. In contrast, the West End and Midtown submarkets have seen construction activity decrease by 25% and 20% respectively over the past six months. This is largely as a result of a number of projects completing and smaller schemes starting. For the first time, the crane survey also tracks construction activity in three additional locations: Vauxhall-Nine Elms-Battersea, White City and Stratford. These three areas boast 11 office schemes under construction and will deliver 2.9 million sq ft to the market, 65% of which is already pre-let.

Will Matthews, head of Insight at Deloitte Real Estate, said: “2015 and 2016 have been the most active years for new developments in two decades, with 148 schemes totalling 15 million sq ft starting construction. Many of these schemes are now nearing completion, meaning that almost 7.5 million sq ft of offices are due to be delivered between now and mid-2017.”

Lewis added: “There is 6.1 million sq ft of new space under construction already let. However, occupiers are increasingly adopting a cautious approach to leasing. The total volume of existing office space let in 2016 was down by 37% on the previous year and this is leading to greater choice and competitiveness for occupiers.”

Matthews continued: “The expected increase in completions, combined with macroeconomic uncertainty is leading some developers to defer the start-date of future speculative schemes. Our pipeline is showing the bulk of future delivery is now likely in 2019 and 2020. Nevertheless, demolition levels have increased by 12% over the six months, indicating that other developers are continuing to press ahead.”

Lewis concluded: “Our research shows that with a marked slowdown in wider occupier demand and increasing levels of supply in the short-term, the balance is now moving in favour of London’s office occupiers.”

Welput receives planning consent for the refurbishment and extension of the Farringdon Road Estate to deliver high quality, sustainable commercial...

BW: Workplace Experts has recently completed the strip out, Cat B fit out and refurbishment works on a government project in Westminster, London. The project involved the...

The modifications include unisex self-contained “superloos” and improved ventilation to provide occupants with 20 per cent more fresh air than conventional...

Tranquil Dawn To See In The New Decade

The colour of the year all good interior designers will be clamouring for in 2020 is...now wait for it...Tranquil Dawn, as revealed in the Colour Futures 2020...

JLL's Helen Gough says the real estate sector generates 64% of all waste in the UK and consumes more natural resources than any other. At JLL, we acknowledge the...