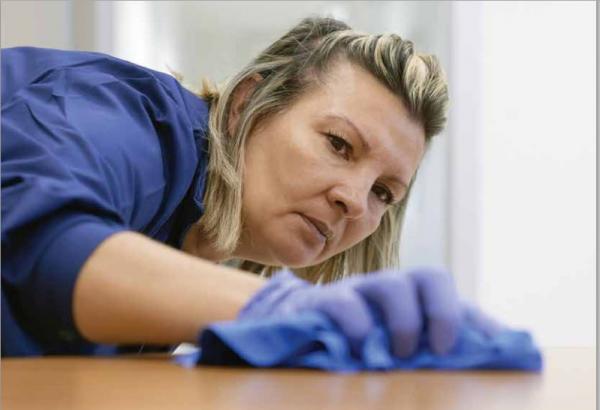 An examination by the Equality and Human Rights Commission (EHRC) published at 00.01am this morning, has revealed that some employers in the commercial cleaning industry are failing to meet their responsibilities to their staff in relation to pay, holiday or sick leave and dealing with their concerns.

Many cleaners feel that their employer, client firms and the public do not treat them with the dignity and respect everyone should expect.

The non-domestic cleaning workforce is largely made up of women, migrant and older workers. While the Commission found many examples of good practice in employment and working conditions, many cleaners spoke of being ‘invisible’ - the ‘lowest of the low’, being spoken to rudely and treated badly compared to  other employees.

Despite the £8 billion contribution the cleaning industry makes to the British economy each year, large numbers of cleaners reported problems with under-payment or non-payment of wages. This can drive them into poverty and indebtedness. The report identified examples of workers being sacked for complaining about not being paid in full and on time.

The industry has been the subject of extensive outsourcing since the 1970s and price competition has led to a general downward pressure on wages and working conditions says the EHRC.

Migrant workers’ lack of awareness of employment rights and poor language skills left them particularly vulnerable to mistreatment. Some of the migrant workers interviewed had not been given an employment contract; others did not have their contracts adequately explained to them. A few migrants said employers used language barriers to avoid paying them in full.

In some cases workers were told by their employer they were not entitled to paid holiday or sick leave, although they were permanent workers with legal entitlements. Some felt pressurised into going into work when they were ill and others were expected to arrange their own cover.

Some cleaners said they had nowhere to take a break as some clients did not provide for this and they were denied access to staff canteens and some workers had to eat their meals in cupboards full of mops, buckets and cleaning chemicals.

The Commission, which promotes and enforces the laws that protect everyone’s right to be treated with fairness, dignity and respect, makes a number or recommendations for the industry. These include encouraging clients to commission cleaning services at living wage rates, as a matter of good practice. It also wants them to consider what action they can take to ensure cleaners are treated with the same dignity and respect as their own workforce and customers.

The Commission found that longer contracts created a more positive relationship between the client and the cleaning firm, gave greater job stability to cleaners and encouraged investment in workforce development.

The Commission is now setting up a taskforce, chaired by EHRC Deputy Chair Caroline Waters, to look at issues raised by the report, identify examples of good practice and ways of taking these forward. she said: “Fairness, dignity and respect are values we all share. Yet the Commission uncovered some disturbing evidence of the absence of these in the treatment of many cleaning workers by supervisors, clients and the public. Cleaners are largely invisible, despite the cleaning workforce numbering nearly half a million people.

“Our evidence showed that, while many workers are treated well, enjoy their job and have their rights upheld, a significant number do not.  Cleaners do physically hard work and often take great pride in their jobs but many felt that they were not appreciated or afforded the dignity and respect shown to others in the workplace.

“They may be bullied by supervisors, have problems with their pay and have excessive workloads. This can often be linked to a focus on reducing costs at the expense of good practice in employment and contracting.

“I am looking forward to working with the cleaning firms, Union representatives, clients, trade bodies and government organisations that make up this yearlong taskforce. Together I believe we will identify key actions to improve practices across the sector and ensure that everyone understands their role in ensuring workers are treated with dignity and respect.”

A view from the industry

Phil Smith – Corporate Relationship Director, Facilicom UK told ThisWeekinFM: “The Commission’s report acutely highlights how our industry, whilst doing many things exceptionally well, needs to take a close look at its more widespread people-orientated operational practices. Throughout the many diverse levels of cleaning service provider we must seek out improvements in the way we look after our cleaners. We have an obligation as responsible employers - as do our clients and members of the public as responsible people - to support our colleagues with kindness, consideration, respect, fairness and best practice."

Smith continued: "Cleaning is a tough job that is rarely recognised and applauded and it is time to raise the profile of these twilight heroes and acknowledge how crucial their work is and how much they are appreciated. Facilicom is delighted to be a part of the Cleaning Taskforce that the Commission has created and I personally look forward to working with all the represented organisations to identify ways of making our best practice ‘better practice’ and to bringing meaningful and beneficial change.”

Lauren Kyle, cleaning development manager for Sodexo, said: “We welcome the recommendations from the Equality and Human Rights Commission cleaning report and are delighted to be part of the taskforce to promote best practice in the industry.

“Through various recognition initiatives such as the Service Excellence Awards, and our ‘on the spot’ and ‘star of the month’ appreciation schemes, we encourage our employees to embrace the Sodexo values of team spirit, service spirit and spirit of progress as we know this is the best way to a valued and productive workforce.

“Sodexo employs around 9,000 cleaners throughout the UK and Ireland across a range of working environments including the healthcare, corporate, education and defence sectors. Our success relies upon employees who are engaged, motivated and effectively trained. While infection prevention and control is essential to patient care in healthcare facilities, high standards of cleaning in all environments can help to promote wellbeing, reduce absenteeism and improve productivity."

The executive summary and full report - The Invisible Workforce: Employment Practices in the Cleaning Sector can be found here

An examination by the Equality and Human Rights Commission (EHRC) published at 00.01am this morning, has revealed that some employers in the commercial cleaning industry...

In light of the recent Equality and Human Rights Commission (EHRC) Report, ‘The Invisible Workforce: Employment Practices in the Cleaning Sector’, The...