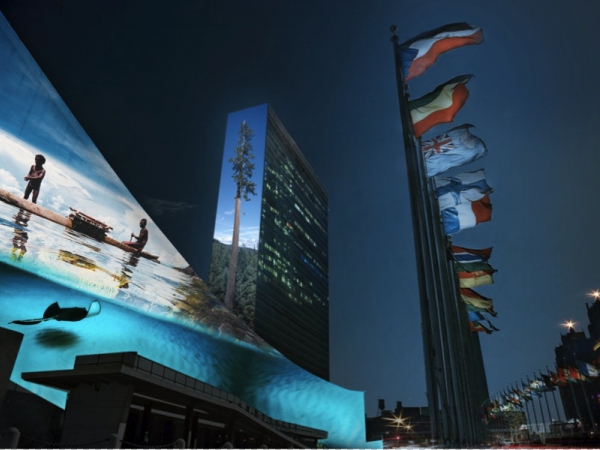 In the lead up to this week's Climate Summit, the UN's New York Headquarters become a canvas for a work entitled 'llluminations - Protecting Our Planet' - a massive projection display.

The iconic headquarters complex saw a spectacular 30-story architectural projection show aimed to inspire global citizens to take climate action. It was and organised in partnership with the Oceanic Preservation Society (OPS) and Obscura Digital. The projections were shown on the white marble west facade of the UN General Assembly Hall and north facade of the Secretariat building from 7:30 to 11:00pm on Saturday evening before the worldwide Climate Change march which brought cities together to demonstrate for carbon reductions.

With its striking scenes, the display provided a breathtaking visual reminder of what is at stake as Un Member States, as well leaders from finance, businesses, civil society and the public and private sectors, prepared to gather at the UN on Tuesday for a special climate meeting prior to a general assembly - with an emphasis on security - which ran until Friday.

Mr Ban Ki-moon, UN Secretary-General joined the Climate Change march in person and was host to the Climate Summit which aimed to galvanise action on reducing emissions and to achieve a universal and legal climate agreement by 2015.