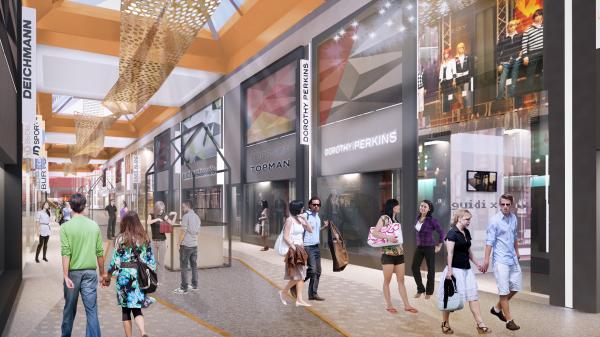 Capital & Regional will be carrying out a £3 million refurbishment of The Mall Walthamstow, London.

The design proposals mark the first step in longer term plans to reposition the shopping centre, for which Capital & Regional is exploring the delivery of an 80,000sq.ft extension.

The plans have been drawn up with the stated intention that will see the shopping centre aligned more closely with the ‘evolving shopper demographic’. The north-east London town has been recognised as an up-and-coming area and Capital & Regional’s plans will tap into this, recognising what it sees as ‘strengthening demand’.

Spanning 250,000sq.ft, The Mall Walthamstow is part of The Mall Fund, managed by Capital & Regional and Aviva Investors. The revitalisation of the centre will begin in June this year and is set to complete in March 2015.

The refurbishment to the existing shopping area will see an opening up of the central area to create a fresh new eatery with a suspended lighting scheme and a dynamic new staircase to the upper floor.

The refurbishment of The Mall Walthamstow will coincide with Waltham Forest Council’s redevelopment of Walthamstow’s town centre, which is set for completion at the end of 2014.

The oldest Bentley dealership in the world – Mayfair icon Jack Barclay Bentley – has officially reopened its doors after a comprehensive refurbishment,...