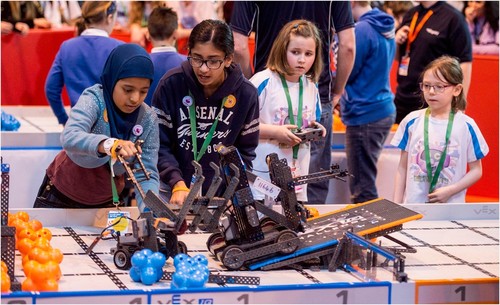 It's International Women in Engineering Day on Friday 23 and though it's obvious more action is needed to shift perceptions of STEM careers amongst females - those on their career path say they are enjoying themselves.

Following the first year of a two year programme, 95% of females questioned said they now believed STEM subjects were fun, creative and exploratory.

Funded by National Grid, who want to inspire more females to enter engineering careers, VEX Robotics carried out the Girls into STEM Initiative aimed at getting more girls involved in extra-curricular competitive robotics, with a requirement for all schools and teams to have female representation. VEX has subsequently undertaken research in countries up and down the country to assess progress.

The VEX Robotics Competitions take place from April to April each year, with schools from across the country taking part. School teams are given a different engineering challenge each year in the form of a game and must create a robot able to complete that challenge. Each school competes against other teams in regional heats leading to a UK National Final. Both teachers and students were surveyed at the start and end of their first year of involvement to ascertain changing perceptions.

A study found that many engineering careers are still perceived (particularly among parents) as ‘dirty and messy’ jobs. This male-dominated stereotype is a huge challenge in schools across the UK who must try to change perceptions to STEM careers making them accessible to all. The findings of the initiative have shown that many students and indeed their influencers did not have a good idea about the variety of careers in STEM. Engineering is one of the most misinformed fields in this country demonstrated by the fact that female engineers make up just 9% of the existing skilled engineer workforce.

Following the first year of the two year programme (2015/16) a huge majority of female students are not only more interested in learning more about robotics but also wanting to take science or maths in both school and college. 9 out of 10 students improved their approach and confidence across all aspects of STEM learning.

The GIS programme showed that mind-sets can shift with a different approach and delivery - training teachers to become aware of the STEM career opportunities available, maintaining a competitive atmosphere in schools where students can thrive and providing girls-only platforms so girls can unleash their potential without being hindered by misinformed prejudices.

Picture: Get girls involved in robotics, engineering and STEM generally and they excel

Why Do So Many Women Leave Engineering?

ThisWeekinFM recently ran an article on the topic of women engineers not staying in the business - here we publish a Harvard Business Report by Susan S....

Female engineers are leaving an already male-dominated engineering field due to a culture that does not take them seriously, according to Professor Brian Rubineau of...

Building Resilience Through the Pandemic Through FM

What role has facilities and engineering services played in building and maintaining business resilience?  Yash Kapila, Managing Director of Integral, a JLL owned...

An updated guide on sustainability, published by CIBSE, puts engineers at the heart of building better performing, sustainable buildings. The guide is intended to...