It's Howdy to Atlanta Folks 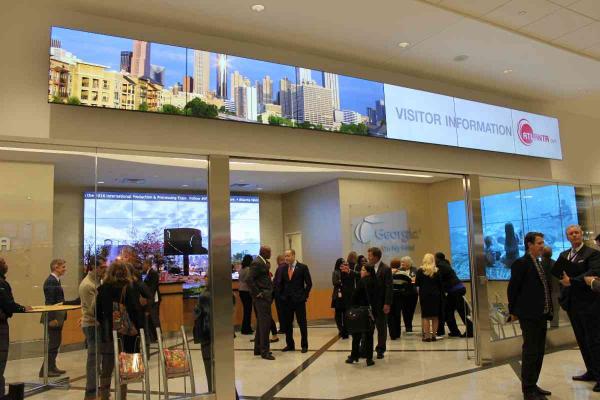 Claiming to be the world’s busiest airport, Hartsfield-Jackson Atlanta International Airport, the Atlanta Convention & Visitors Bureau (ACVB) with audio-visual support from Electrosonic, has opened a new welcome centre in the heart of the facility.

Electrosonic installed four video walls in the welcome centre using a total of 40 55in Samsung UD55E-P ultra-narrow bezel LED monitors. A 6 x 1 wall tops the entrance, a pair of 3 x 3 walls lines the sides and a 4 x 4 wall fills the rear of the new centre.

Located adjacent to the domestic baggage claim and local transport, the new operation offers greater accessibility and more visibility to passengers arriving in Atlanta. “The ACVB had a small booth with overhead monitors before but this is a much larger space with new display solutions that really pop,” explained Tom Rowat, Project Manager, Electrosonic. “Everyone coming to baggage claim or connecting with ground transport is going to see it.”

Four BrightSign 4K video players serve as sources for the four video walls. The players are located behind each of the walls eliminating the need for a large equipment rack and expensive extenders. Electrosonic provided a Crestron control system whose operator interface at the site offers individual monitor control and the ability to bring up test patterns on the video walls for colour balance and monitor alignment.

“Tom and his team provided top-notch service and design from the onset of the project,” said Andrew Green, Content Creator, Green Media Works which was also hired by the ACVB to provide original content for many of the displays. “The system Electrosonic installed provided exactly what was wanted – it’s simple to use, very powerful and it just works.”

The 4 x 4 video wall at the rear of the welcome centre which measures 16ft x 9ft, features a series of beauty and cinematic portraits with big scenic shots of skylines and dynamic clouds and aerial views of cities. Single 4K shots transition and a grid screen with multiple vignettes give visitors more information about specific neighbourhoods and attractions.

One of the 3 x 3 video walls runs a compilation video created by the state of Georgia which has partnered with the ACVB in the welcome centre. The other 3 x 3 wall features equal portions of additional state content and original content from Green Media Works, including a page showcasing dynamic Instagram feeds from #weloveatl.

European Union member states are unprepared to fully embrace the benefits of the smart building revolution according to a study published by the Buildings Performance...

Getting a Dose of the Smarts