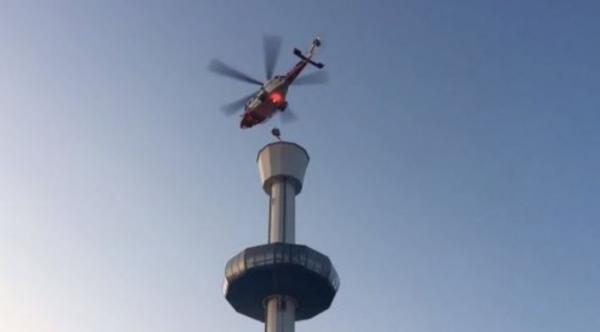 Merlin Entertainments, the biggest ride and attraction company in the UK and with sites across the world, have suffered another embarrassment as 14 people including a baby were trapped at 53 metres (174ft) on top of the Jurassic Skyline tower in Weymouth on the afternoon of Sept 5.

Merlin has Sea Life Centres, the Eye attractions, Alton Towers and Blackpool Tower amongst its portfolio.

The Jurassic Skyline tower (known until mid-2015 as the Weymouth Sea Life Tower) is situated next to Weymouth Beach and the Weymouth Pavilion. It first opened in June 2012. The clear-fronted passenger gondola is able to turn a full 360 degrees as it rises during operation. It can accommodate 69 passengers at one time and each tower session lasts approximately 15 minutes.

At about 4:00pm the gondola stalled. A family of eight, a family of three, a couple from Essex and the 18-year old ride operator were all winched to safety by a coastguard helicopter in an operation that commenced at 7:30 after all other rescue options had been dismissed. The last person was rescued at 10:00pm. Eight people were taken to safety (by 9:00pm) before the helicopter had to refuel and return.

Technical rescue crews from Weymouth and Poole, plus the aerial ladder platform from Westbourne and a supporting crew from Dorchester, attended the scene and firefighters ascended the platform to provide support and reassurance to the people trapped inside.

Those rescued were taken to the Weymouth Pavilion for health checks. One person was taken to a local hospital with minor injuries incurred when being winched.

The young lady acting as the ride operator was congratulated for her calmness during the ordeal and for keeping passengers up-to-date with what was happening -  she was in contact with ground crew throughout.

During the incident, the Jurassic Skyline took to Facebook to say: 'We are currently experiencing technical difficulties and the Skyline has stopped on its current flight. We are working on resolving this issue and will update everyone shortly'. No further updates have been made available by the Jurassic Skyline or Merlin.

Picture Caption : Helicopters were used to lift people off the Jurassic Skyline Tower

As reported recently on ThisWeekinFM, Chicago is home to skyscrapers that take advantage of their position to entertain visitors at height (click here for previous...