K2 to Conquer the Summit 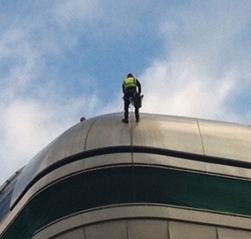 Paul Crilly, MD of Not Just Cleaning said: "The combined services will provide NJC with a comprehensive and fully self-delivered rope access solution."
K2 will be managed by Steve Collier who said: "The merger allows us to develop our services. Our plans are to establish K2 as the authority on inspection, testing and maintenance of vertical glazing, cladding and façades and on working at height from a rope access perspective."