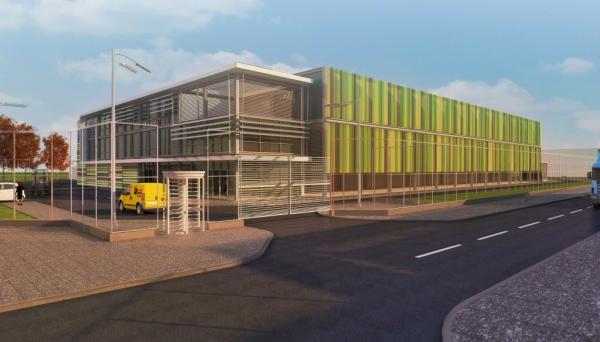 This is the first of four data centre buildings and represents the next phase in the £250m Kao Park development.

Following completion of the below ground connectivity infrastructure, utility services and piling, construction has now started on site and is forecast for completion in phases through 2017. JCA Engineering describes itself as 'a technology focused mechanical and electrical contractor'.

KAO Park has also awarded a separate contract to Matrix Networks, a power utility contractor, which will lead the construction of the UKPN adoptable 33kV/11kV 43.5MVA sub-station providing capacity to support the entire Campus, which is due for completion April 2017.

KAO Data Campus will comprise of four data centres each split into four halls and designed over three floors, totalling around 150,000sq.ft. nett technical space. Each technology suite will be capable of supporting a 2175kW IT load totalling an 8.7MW IT load across each building. Infrastructure work across the site is part-funded by Harlow Council and HCA.

Paul Finch, chief technical officer at KAO Data said: “This announcement marks a significant milestone. The provision of high specification data centre facilities is essential in order to maintain the UK’s position as a global hub for business connectivity. Kao will be placed to support local and international businesses combined."

Kao Data Campus is named after Charles Kao who, 50 years ago, co-discovered the technology behind fibre optic cable whilst working for Standard Telephone Laboratories (later Nortel). His work won him the 2009 Nobel Prize for Physics.