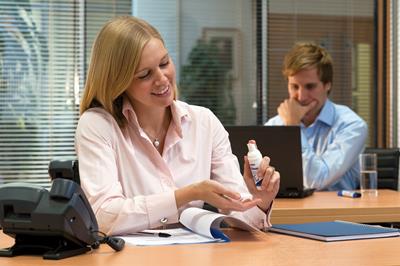 As we head back to work in the New Year, office staff have told researchers that when the sun is shining they don't think about what might be lurking on surfaces. But as the coughs and sniffles resound, the same staff start to look at where other people's hands have been. Nearly three-quarters are concerned about the presence of germs in their workplace in the Winter, according to an independent poll commissioned by Kimberly-Clark Professional.

In the survey, which was conducted by Cogent Research among 303 office workers from across England, 21% said they were 'greatly concerned' by germs at work, with 51% stating they were 'somewhat concerned'. Meanwhile, 57% said they were worried about the transfer of germs from work to home. Suzanne Halley from Kimberly-Clark said: “Office workers are right to be concerned about hygiene at work all year round. Invisible bacteria in the workplace can cause colds, flu and upset stomachs. Though they are minor, these are unpleasant illnesses that force people to take time off. Staff absence costs UK businesses nearly £30 billion annually. However, simple steps such as installing sanitisers around an office and making sanitising wipes widely available, can make a big difference to wellbeing.”

She continued: “A healthy workforce is a happy and productive workforce. Particularly at this time of year, in the middle of the cold and flu season companies that take pro-active measures to keep their staff free of illness will be rewarded in the longer term.

"Implementing measures to keep people healthy at work isn’t difficult. The strategic positioning and distribution of sanitisers, both non-alcohol and alcohol varieties, is one of the most effective tools to keeping people healthy."