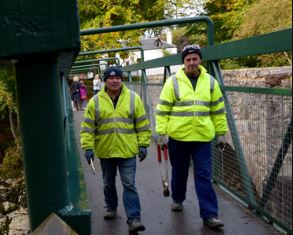 According to the union UCATT, eighteen workers were left high and dry without jobs or any idea of their future when council contracted employer Kier Construction (which has its own FM division) backed out of contract with Aberdeenshire Council with three months remaining.

The maintenance workers were left in limbo. They apparently turned up on to the council's offices on January 4 - a bank holiday in Scotland - and not unsurprisingly found the offices closed.

Aberdeenshire Council has stated that there will be a group of contractors taking over from Kier but had not named them. A spokesperson claimed that the new contract would be divided between 12 smaller companies and so the eighteen workers would not be TUPED over to the new companies. The council did however interview seven of the workers and employ two. All bar one have now found alternative employment.

UCATT is taking legal action against both Kier and Aberdeenshire Council for failure to consult and breach of TUPE regulations.

Telereal Trillium, a major property and services provider, has appointed Cofely to deliver a range of hard and soft facilities management and project services under a new...

UK Unpaid Invoice Complaints ŌĆō Which Sectors Have Been Most Affected?