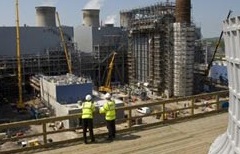 Haydn Mursell, chief executive of Kier Group doesn't believe that any sensible contractor would take on Carillion's jobs unless the contracts are negotiated at higher rates than those that saw the builder and outsourcing firm go bust.

It would naturally follow from what Mursell has said, that the government would have to go in to new tendering rounds for projects that are either stumbling or have fallen silent.

Kier, however, has already taken on some of Carillion's HS2 and motorway infrastructure projects but Mursell was adamant when appearing on a BBC radio news station (Radio 4's Today) that there was a choice between getting on with jobs to hit completion targets or delaying to negotiate value for money. He said: "Do they (the government) want them completed to a certain time frame in which case they need to engage quickly or is it about value for money, in which case, maybe a re-procurement might occur but nobody is going to take on Carillion's loss making projects on current terms."

Update on joint ventures with Carillion

On HS2, Kier and Eiffage are now 50/50 joint venture partners delivering two of the seven civil engineering packages, lots C2 and C3. All 51 Carillion employees, including apprentices, working on the CEK HS2 joint venture have been offered the opportunity to join Kier/Eiffage with continuous service being maintained.

At Highways England, Kier has assumed full responsibility for the smart motorway schemes on which they had been working in joint venture with Carillion. All employees currently working on the schemes have been offered the opportunity to join Kier. In total c. 150 employees will be making this transition including seven apprentices. Communication with the existing supply chain on this project has also taken place ensuring continuity of skills, resources and suppliers on these projects.

Transport Secretary Chris Grayling indicated that the government was already making contingency plans when it allowed Carillion in on the HS2 deal. He said: “HS2 and Highways England carried out at the point of award, additional due diligence to ensure, even without Carillion, these projects would continue. Both Highways England and HS2 will, of course, continue to monitor the situation.”

On January 9, Kier announced it had been appointed by Public Health England (PHE) to deliver a new £160m specialist bioscience laboratory building as part of a new £400m public health science campus and headquarters in Harlow.

The largest of the four projects, known as Lot 1, will see the construction of a new laboratory facility with a gross internal area of approximately 17,000Sq.m.

This scheme forms part of PHE’s new state-of-the-art public health science campus and headquarters at Harlow, Essex, with the new bioscience laboratory one of four projects being delivered at the site.

Other works being carried out include the refurbishment of existing buildings, construction of new administration and logistics buildings and installing site-wide infrastructure and ICT. Construction work is expected to begin in 2019, with this new building due to be operational by 2023.

PHE Harlow, as the campus will be known, is expected to employ up to 2,750 people by 2024, with scope for further expansion. Facilities from Porton in Wiltshire, Colindale in north London, as well as PHE’s central London headquarters will be relocated.

Kier has also been appointed to design and build a new higher education teaching facility for University College Birmingham.

The £29 million project is the latest phase of the University’s £100 million redevelopment of its Jewellery Quarter campus in the centre of Birmingham and will see Kier build a new four-storey, 8,500sq.m undergraduate and postgraduate teaching building.

As well as teaching space, the facility will also include an indoor running track, lecture theatres, learning areas and teaching staff offices. A new 160-space multi-storey staff car park will also be built on the site.

Picture: Kier has a positive outlook

Are Offices a Greater COVID Risk Than Supermarkets and Restaurants?

Data from Public Health England suggests that office environments have had more COVID outbreaks than other workplaces. Figures obtained by the BBC 5 Live...

Public Health England to be Replaced by New Body

After being scrutinised for its response to COVID-19, Public Health England will be replaced by the National Institute for Health Protection (NIHP). The institute will...