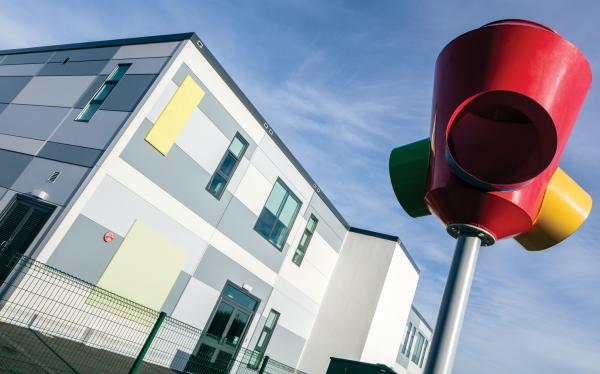 The Portakabin Group has expanded a PFI primary school in Leeds to provide more than 200 additional places, helping to meet the increasing demand for primary education in the city. The scheme at Asquith Primary School was delivered after just 18 weeks on site using a Yorkon off-site solution – reducing the programme by at least five months.

The project was part of an ongoing, city-wide schools expansion programme. The rise in birth rates, the numbers of people moving to Leeds and the level of new housing have significantly increased the pressure on education provision. It has been estimated that around 4,000 additional primary school places will be needed in the city.

Opened in 2002, the existing school was built under the Private Finance Initiative and is managed for Leeds City Council by Carillion.

Commenting on the project, Zoe Laidlaw, Senior Operations Manager for North and West Yorkshire and Humberside at facilities managers, Carillion said: “Because this project was a PFI scheme, there was a very complex and challenging procurement process. The building has a great design – a very open, spacious feel and excellent areas for outdoor learning. Use of a Yorkon off-site solution significantly reduced time on site by at least five months which was very important when working on a live school project.”

“Portakabin also involved the children in the construction process, which was a fantastic way for them to learn and everyone was blown away by seeing their new school building being assembled in the factory.”

Gillian Austerfield, Head Teacher at Asquith Primary School, said, “We would recommend the Yorkon solution to others in the education sector. We love the design of the building. The rooms are light and airy and the break-out space provides an excellent learning area. The large windows have created a bright and stimulating environment for children.”

Much of the two-storey building was fitted out off site at the Group’s production centre in York to minimise any disruption to teaching and to radically reduce the programme time. It was delivered to site with all M&E services, toilets, doors and partitions already pre-installed.

The self-contained building provides eight purpose-designed classrooms, an IT hub, library and resource area, and break-out spaces to both the first and second floors. Externally, the facility is finished in white and grey with green rendered panels to add interest to the façades, white render and brickwork to the lower levels and a double height glazed entrance. Large picture windows allow lots of natural light into the classrooms, creating a positive learning environment.

The location for the new facility was very constrained and a temporary road had to be constructed to make way for the crane and installation of the building modules. The cranage phase was carried out over a weekend to ensure no interruption to the running of the school.

Picture: A PFI primary school in Leeds has been expanded with an off-site construction solution

Bytes And Mortar - A Digital And Off-site Construction Revolution

An ambitious new partnership between the government and the construction industry has been revealed. With almost half of the economy reliant on the built environment...

A multi-million pound fund to help tackle the construction skills shortage has been launched. With 158,000 new construction jobs expected to be created in the UK over...

My Pod - Pop-Up Space At DesignJunction