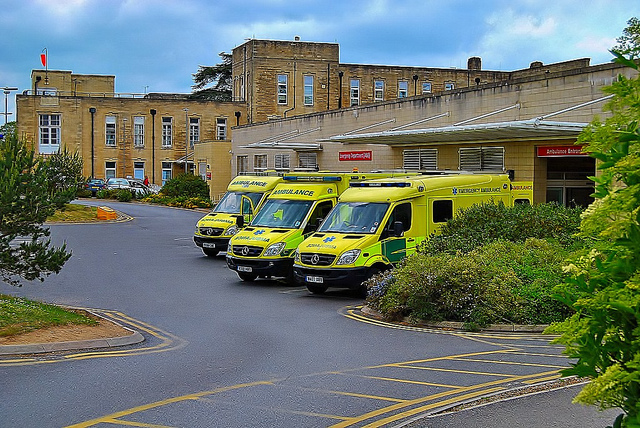 An NHS Trust has been £300,000 for the death of a patient from Legionnaires' disease and not managing its water systems correctly.

In separate cases - a waste contractor was crushed by a runaway lorry; and a young man suffered horrific burns.

Royal United Hospitals Bath NHS Foundation Trust has been fined £300,000 after failing to control the risk to patients from exposure to legionella bacteria in its water systems.

Bristol Crown Court heard (on April 20) how, in July 2015, Mr Terence Brooks, a 68-year old patient at Bath’s Royal United Hospital, died from Legionnaires’ disease. Following Mr Brooks’ death, the Health and Safety Executive launched an investigation which found that the Trust had failed to put in place all of the necessary precautions to minimise the risk to patients in the annex to the William Budd ward from exposure to legionella .

The HSE’s investigation revealed that the annex to the William Budd Ward is on a separate loop of the hospital’s water system to that which supplies the main ward. This important fact had not been recognised by the Trust from the opening of the annex in 2009 until Mr Brooks’ death in July 2015. This failure meant the required temperature checks and tests for the presence of legionella  bacteria in the water had not been carried out in the annex over this period.

Tests carried out after Mr Brooks’ death revealed problems with water temperatures in the annex and legionella  bacteria were found in water samples taken from outlets in all five isolation suites in the annex to the William Budd ward.

Speaking after the hearing, HSE inspector Susan Chivers said: “Legionnaires’ disease is a type of pneumonia which can be fatal and people who are being treated in hospital are especially susceptible to infection. That is what makes RUH’s failings in legionella  management all the more concerning.

“RUH had measures in place to prevent and control the risk to its patients from exposure from its water systems but these were ineffective due to the Trust not having accurate knowledge of the layout of those water systems.”

“All organisations have a responsibility to manage their water systems to protect people from the risk of legionella infection," continued Chivers. "It is essential that organisations review their risk control measures whenever there is reason to suspect that they are no longer valid or when there are changes to a water system.”

After the hearing, Terence Brooks’ family gave the following statement: “The family are pleased that the HSE have pursued this and that as a result changes have been made at the RUH. Our hope is that no other family will suffer as we have.”

A memorandum of understanding between the Care Quality Commission (CQC) and HSE now gives CQC the responsibility for enforcing legionella control measures where there are risks to patients from legionella in hospital water systems.

A waste management company has been sentenced (April 20) after a 56-year old man was fatally injured in a lorry runaway incident at a hospital in Plymouth.

Plymouth Crown Court heard how, on 8 June 2015, at approximately 7:00am, Lee Jane, an employee of Viridor Waste Management Ltd, was working at Derriford Hospital, Plymouth.  Mr Jane had been using a lorry and trailer to remove skips of ash from the incinerator within the hospital premises. He had parked his lorry and trailer on a downward sloping road outside of the incinerator building.

Mr Jane was in the process of coupling the lorry to the skip trailer on this road when he lost control of the vehicle combination. He attempted to prevent the vehicle runaway but was drawn under the trailer and tragically sustained fatal injuries. The runaway vehicles continued rolling downhill and collided with the hospital radio building.

An investigation by the HSE established  the handbrake of the lorry had not been applied.  The investigation also found that there was no suitable and sufficient specific risk assessment to address the waste collection operation on site and in consequence the work had not been appropriately planned.

During the course of the trial, Viridor Waste Management pleaded guilty to breaching the Management of Health and Safety at Work Regulations 1999 in relation to the failure to conduct a suitable and sufficient risk assessment of the work being undertaken.

Speaking after the hearing, HSE Inspector Georgina Speake said: “This was a tragic death and Viridor Waste Management should have conducted a suitable and sufficient assessment of the risks posed by this operation.  In particular, the company failed to properly assess the suitability of the location which drivers were using for the skip collection operation.

“Both HSE and industry guidance suggest that tasks like this should be carried out on firm and level ground.  It is my view that there were level areas within the hospital grounds that the defendant should have identified and designated for the drivers to load the skips and couple the trailer.  The fact that the location chosen was on an incline heightened the need for careful risk assessment - and this was not done.”

Southwark Crown Court heard how, on 11 January 2015, workers were spraying insulation into a ceiling cavity of a retail outlet. The foam spraying equipment was installed in a van parked outside the premises. When foam ceased from the spray gun, one of the operatives entered the van to refuel the equipment. A jerry can was fixed with straps within the compartment containing a compressor and generator (both petrol operated). The worker took the jerry can, opened it and petrol sprayed all over him and the compartment. Ignition followed immediately, covering him in flames. Following the event he was in a coma in hospital for three months and subsequently spent over a year in hospital.

The HSE investigation into the incident found that Greenseal failed to ensure that risk from dangerous substances, namely petrol, was either eliminated or reduced so far as is reasonably practicable.

In order to minimise the risk, the company could have taken a number of reasonably practicable actions, including the use of diesel powered spray foam equipment or reducing the frequency of refuelling by installing a larger fuel tank or tanks. Refilling could then be reduced to once a day and taken place at the beginning of the day when the equipment was cool and not in operation.

The potential for spilling petrol could have been reduced by storing it away from sources of heat and confining it to smaller containers or by using a non-spilling fuel delivery nozzle.

Greenseal Insulation pleaded guilty to breaching the Dangerous Substances and Explosive Atmospheres Regulations and fined £40,000 and ordered to pay costs of £11,779.

Speaking after the hearing HSE inspector Gabriella Dimitrov said: “This was the worker’s second day on the job. He suffered horrific injuries due to the company’s failure to adequately consider the risks from refuelling and implementing safer alternatives to the system of work requiring refuelling petrol powered equipment every two hours.”

Picture: Royal United Hospitals Bath has been fined £300,000 after legionella caused the death of a patient.

A construction company has been fined after an employee died after falling over 6 metres. Plymouth Magistrates’ Court heard how an employee of C&R...