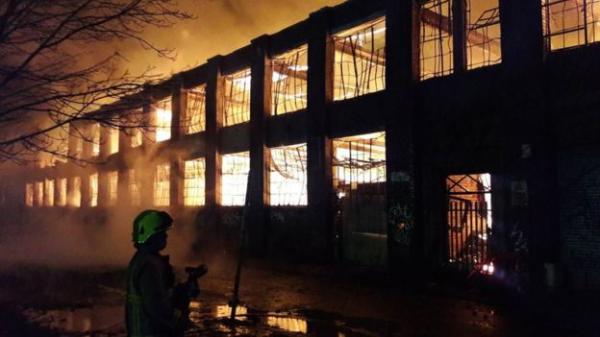 A massive fire in Leicester has shown yet again how vulnerable vacant and derelict buildings can be and the damage and disruption that can be inflicted on nearby property.

This incident was reported just before 3:00am on Thursday 9 and by the time Leicestershire Fire and Rescue Services (LFRS) arrived, a derelict industrial building was an inferno. At least 12 cars in a full carpark have been wrecked. The fire has also damaged a Volkswagen Dealership building.

Fire crews were also at pains to stop run-off from entering an adjacent canal.

8 appliances and 1 aerial ladder platform from LFRS and 1 aerial ladder platform from Northamptonshire Fire Service were called in. By 5:00am, the main building was fully engulfed in fire and a second building was becoming involved. Partial collapse of the main building had occurred. However by 6:00am, the fire service was able to prepare to scale down the operation and by 8:00am they were in the damping down phase.

The electricity board have not been allowed to enter the property because of fears of collapse. The police are have taken charge of site security and notifying drivers of their damaged cars. Local roads have been closed. A search of the building and an investigation will commence later on Thursday 9.

Picture: With thanks to Leicestershire Fire and Rescue