Let there be Light in Signage 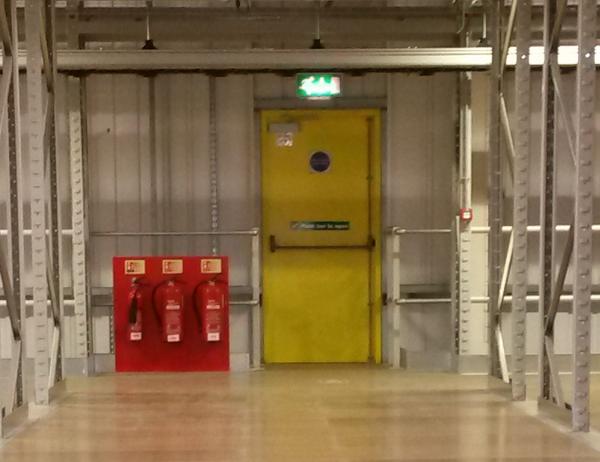 Matalan trades from 5 million sq ft in over 200 stores with several national distribution centres key to its operation.

A revamp of its Corby distribution centre has seen the old multi-storage facility, complete with mechanical crane, given over to a hanging garment dispatch system over six storeys, made possible by the addition of five mezzanine floors in the existing warehouse. With racks of clothing making the usual high level fire safety signage unsuitable, Tyco Fire and Integrated Solutions (TFIS) was called in to deliver an effective option.

It opted for high quality photoluminescent signs on the floor which are AAA rated, giving a high light output of 25lux as well as being durable.

TFIS also developed a location strategy for the 120 fire extinguishers installed in the refurbishment of the centre, using a back board system for mounting the extinguishers with the boards painted red to make them highly visible and numbered.

TFIS carries out all of the servicing of fire safety equipment at Matalan’s distribution centres around the UK.

Picture:    A revamp of Matalan’s Corby distribution centre has seen TFIS advising and installing high quality photoluminescent signs and a location strategy for the 120 fire extinguishers.