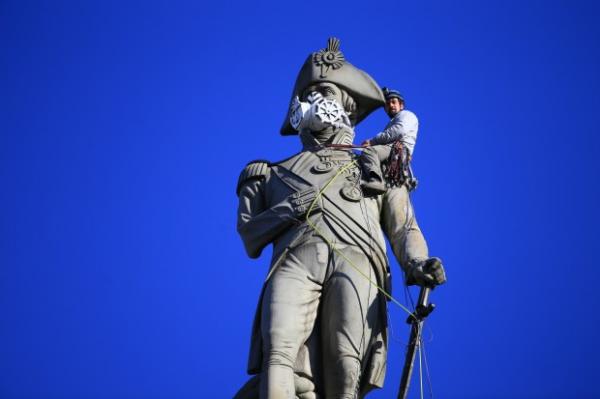 Greenpeace UK took direct action at the beginning of the week by climbing up some famous statues including Nelson’s Column to get over its point on air pollution in London.

The first incident occurred after 4:00am on Monday when police were called to a group of six protestors trying to climb Nelson's Column in Trafalgar Square.

This was followed by two protestors scaling the Cromwell Statue in Parliament Square, followed by a similar events at the Duke of Wellington Memorial in Hyde Park Corner, Churchill’s statue in Parliament Square, Queen Victoria’s opposite Buckingham Palace, Eros’s in Piccadilly Circus and one of footballer, Thierry Henry at the Arsenal stadium. All had emergency gas masks placed on their mouths to highlight what Greenpeace alleges is a failure to protect Londoners from air pollution that breaches EU regulations.

The Met Police said eight people were detained under suspicion of criminal damage and breaching existing bylaws under the Police Reform and Social Responsibility Act 2011.

Greenpeace made no excuses for the actions it took or the problems of having to employ emergency services to deal with the incidents. “Monitoring shows that if these statutes were real people, many of them would often be breathing dangerous, illegal air,” stated Areeba Hamid, a Greenpeace campaigner. “That’s why we’ve given them face masks. Of course many millions of Londoners, including kids, are breathing that same air. Kitting everyone out with face masks is not the solution, instead we need to see real political action from the new Mayor, including a Clean Air Zone covering a large part of the city. Whoever wins the election has to stop the talk and start the action.”

The environmental group pointed to a report as justification for this week’s direct action. Last year, experts from King's College London published a report that combined the effects of nitrogen dioxide (NO2) and a particulate matter, PM2.5 and stated their findings showed that they revealed a ‘higher health impact than previously estimated’.

Current Mayor of London, Boris Johnson, believed advances had been made that would show a decline in premature deaths, although environmental groups argue that the UK is constantly in breach of air pollution levels, particularly in London.

An example of an alleged dragging of feet was the current proposal for an Ultra Low Emissions Zone that would only come into force in 2020 and offer protection from dangerous air to residents and commuters in Zone 1.

It is estimated that apart from London, Birmingham, Leeds, Liverpool, Cardiff and Edinburgh are likely to continue to breach legal limits of air pollution until at least 2020.

Picture: What’s going on air? Greenpeace activists decided on direct action by covering the mouths of a number of famous statues including Nelson this week with emergency gas masks to highlight the dangers of air pollution

With colder days ahead and lockdown forcing many to work from home, energy costs will increase to keep the house warm and comfortable. Unless employees are offered an...

In one of the biggest occupational shifts in the 21st century, working from home is the new normal for most that work with a personal computer. How is this expected to...