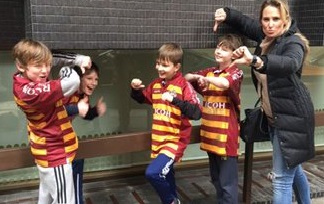 Pall Mall Medical, a Manchester based cosmetic surgery practice, came off looking like bad guys week ending Feb 3 after the company they lease their offices from installed human sized 'pigeon spikes' to prevent rough sleepers from making themselves comfortable in wind protected alcoves.

The story hit the headlines and was all over social media - with Pall Mall having to Tweet its innocence.

A mother working as an estate agent had became so incensed when she read of the installation, she piled down to Primark on a Sunday and bought piles of cushions to cover the spikes - and produced a picnic and signs to invite anyone passing (homeless or otherwise) to park their bods and defy the dastardly landlords. Joined by her best mates - her sons George and Sam - Jennie Platt marched up and down near the site on Marsden Street and told anyone that would listen (including the BBC and the Manchester Evening News) what she thought of people being treated like feathered vermin.

GVA, part of the Bilfinger Group (which bought in to and then sold out of the UK FM market but retains its property interests) manages the building on Marsden Street. The company claims 'as the UK’s leading real estate advisory business, we provide our clients with a strategy and planning and delivery and management service'. This time around, the company has effectively admitted to offering bad advice and delivery but were able to remove the 'spikes' within 48-hours of the balloon going up, Friday Jan 27 - but not soon enough to detract from the negative press this week ending Feb 03.

Pall Mall Medical only rents part of the building but was embroiled in the accusations of being inhuman. The firm's Twitter feed started with 'we officially would say we have had zero involvement in the spikes. This decision was made fully without our consent or involvement'. Followed by 'we are pleased the spikes are now removed, before any damage was done'. But not before ‏@wurlyburgh wrote 'put pressure on the buildings [sic] owners to get them removed for the sake of your reputation and common decency'.

Pall Mall then took to a press release and public statement that reads: 'Pall Mall Medical would like all our clients, patients, consultants, colleagues and employees to know that we have had no involvement whatsoever in the decision to place the 'spikes' in the Pall Mall Court on 27th January. We were not aware this was being planned. Pall Mall Medical is not in occupation of the unit next to where the spikes were attached. Whilst part of our branding remains, our clinic has fully expanded into the 61-67 King Street unit'. Pall Mall also stated that the Marsden Street block had 15 other residents - though none of them were tarred with the same brush.

Jennie from the hood?

One particularly unkind Twit wrote: 'Nice to see an estate agent help out the people she probably made homeless with her industry's extortionate fees'.