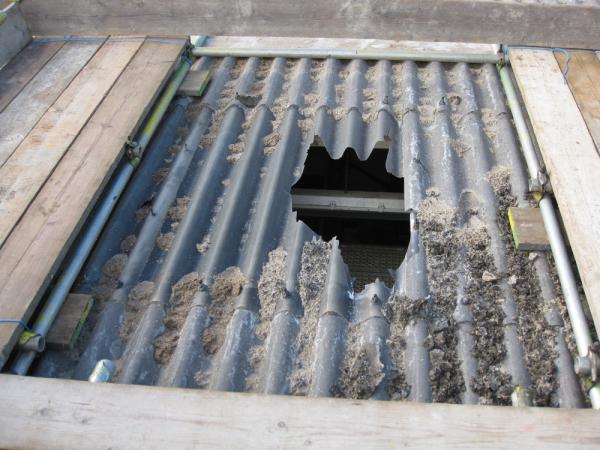 Cleansafe Services, a Surrey based cleaning business, has been prosecuted for safety failings after an employee suffered life changing injuries when he plunged 6m through a fragile rooflight.

The 36-year-old, from Goring-by-Sea in West Sussex, was one of a small team sent by Cleansafe Services (UK) to carry out a contract-clean of 24 acrylic rooflights at a car rental premises in Eastbourne.

At one stage the worker, who did not wish to be named, had inspected a cleaned light from ground level and had just returned to the roof when he inadvertently stepped on to one of the rooflights. The acrylic gave way, sending him falling through to the concrete floor below.

He sustained a complex skull fracture and brain damage, multiple arm and wrist fractures and broke several ribs. He has lost his sense of smell and taste, has impaired sight in one eye and is totally deaf in one ear. He was in hospital for nearly two months, part of the time in an induced coma, and is unable to work.

The incident took place on 11 December 2013 and was investigated by the Health and Safety Executive which prosecuted Cleansafe Services (UK) for several breaches of the Work at Height Regulations.

Eastbourne Magistrates’ Court heard that HSE’s investigation revealed that the safety precautions taken by the company were ‘grossly inadequate’.

The injured man and a colleague had reached the roof using a mobile elevating platform but had taken only six scaffold boards to stand on while jet-washing the rooflights. After two lights were cleaned, the injured worker went down to inspect them from below to see how clean they were. His fall followed just minutes later when he returned to the roof.

After the incident HSE served a Prohibition Notice on the company, halting any further work until safety measures had been installed.

HSE said that Cleansafe could have hired a mobile working platform that had an extended reach, making it unnecessary to even go on the roof, or used proper crawling boards with handrails and netting inside the building.

Cleansafe Services (UK) was fined a total of £60,000 and ordered to pay £5,741 in costs after pleading guilty to three breaches of the Work at Height Regulations.

“The victim of this case suffered life-threatening, and now life changing, injuries and there is no doubt that this could have been a fatality,” stated, Amanda Huff, HSE inspector. “Cleansafe Services is a commercial company operating throughout the country but had no experience of working on fragile roofs. The risk assessment was not fit for the purpose and the result was the limited safety measures it took to protect the workforce were grossly inadequate.”

Ms Huff went on to state that there were several people killed every year and many more badly injured falling through fragile roofs. She insisted that work should be planned so no one needed to get on to the roof. “Where it is necessary, safeguards such as edge protection, safety nets and roof stagings must be used,” she concluded.

Picture: Cleansafe precautions for one worker who fell through a rooflight were found to be 'grossly inadequate'. N.B. The rooflight pictured (with thanks to the HSE) is from another incident and is for illustration purposes only.