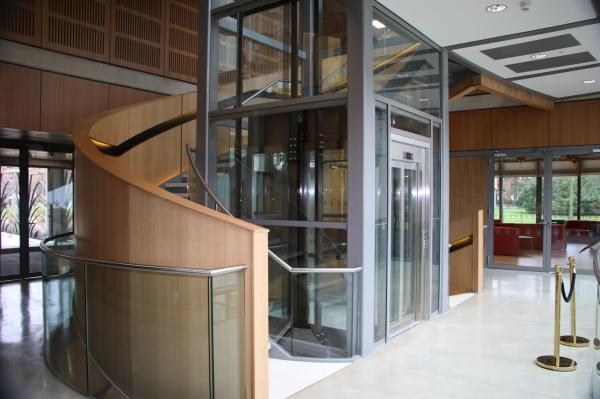 Morris Vermaport - or MV Lifts - deliver the Ecocell lift. It offers a number of benefits including being useable in the event of fire, being easy to install and saving energy.

MV have been installing Ecocell self evacuation lifts for over 10 years, with 200 units now installed throughout the UK. Each lift can operate for up to 100 journeys on battery backup. The batteries can be trickle charged from a single phase supply or from eco-friendly photo voltaic panels and/or wind turbine sources. The lifts can also converted to fully compliant evacuation lifts.

Another positive is they only require a 900mm pit depth which helps when retro-fitting for older lifts.

Morris Vermaport have recently developed a number of design changes. These include PV Cells for battery charging, visual battery monitoring integrated access control for 'self-evacuation' in the event of fire

With its own in-built secondary power supply, which meets the requirement for 20 minutes of standby power, the integrated access control for self-evacuation has been designed for use with all standard types of proximity detection systems. This is particularly effective for those systems used by the disabled or those with limited mobility at all times, rather than just for evacuation purposes

Under normal circumstances for evacuation in the event of a fire, the lift would have to be switched to evacuation mode from the master control station by the leading Fire Officer. This could take some time. However with the MV system, the evacuation can start from the moment the fire alarm is activated.

Picture: The Ecocell evacuation lift is compliant to BS 9999 and carries a strong BREEAM rating

The Daring Assent of Everest

Everest, the double glazing and roofline firm has given its assent to the purchase of 72 Easi-Dec systems to provide installation teams with a safe and cost effective...

2G Energy, a manufacturer of combined heat and power plants, has launched a new range of low emission systems. Ranging from 20kWe to 240kWe, the systems emit 90 per cent...

Tyco Adds to Its Profile