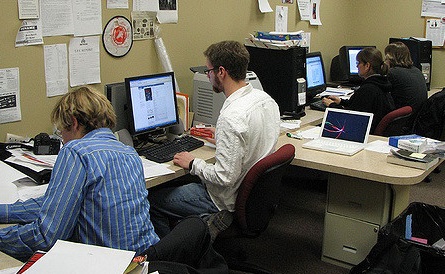 The Fawcett Society’s Local Government Commission includes the shocking finding that just 4% of local councils in England have a formal maternity, paternity or parental leave policy in place for councillors.

A hard-hitting new report concludes that local government is ‘not fit for the future’ as a result of a range of outdated practices and attitudes that hold back gender equality.  The final report of the Fawcett Society’s Local Government Commission includes the shocking finding that just 4% of local councils in England have a formal maternity, paternity or parental leave policy in place for councillors. Some have informal arrangements, but three quarters who responded to a Freedom of Information request said that they had nothing on offer for women councillors who get pregnant.

This report is the result of a year-long study led by the Fawcett Society in partnership with the Local Government Information Unit, which asked ‘Does Local Government Work for Women?’ and contains recommendations to help solve the issues faced by women in town halls.

The report also reveals that women are outnumbered six to one in Finance or Economic Development roles, which usually lead to the top.  This helps to explain why just 17% of council leaders are women – a figure that has hardly shifted for ten years.

Sam Smethers, Fawcett Society Chief Executive, said: “Local government is increasingly important for all our lives, but particularly for women.  Yet significant barriers remain preventing their participation. This was the picture across all political parties. But many of the changes that are needed, such as a maternity policy for councillors, are relatively easy to introduce.

“As we get ready to mark next year’s centenary of women’s votes and the first women MPs to be elected we have to ask ourselves how we have managed to create new devolved institutions that are even more male dominated than local authorities. We are going backwards and that is fundamentally unacceptable in 21st century.”

Just one in three local councillors is a woman, and the pace of change is slow, going up by just 5% points since 1997. In county councils, which went to the polls this May, it will take until 2065 to reach equality.

Dame Margaret Hodge MP, co-chair of the Commission, comments: “I led a Council 25 years ago and I have been shocked during the course of this review to find how little has changed and how few improvements have been made towards equality in local government. The way councils do business is still designed by, and for, men. This needs to change, and fast. Currently local government is not fit for purpose and does not work for women.”

The report makes a number of recommendations to the Government, political parties, and local councils which would drive change. To get more women in to the roles, the Commission calls for all parties to for the first time set targets for getting more women councillors in, and make it a legal requirement to get 45 percent women candidates if they don’t make progress.

Gillian Keegan MP, co-chair of the Commission, said: “Being a councillor is so rewarding and offers a great opportunity to learn new skills. We need to get out there and sell the merits of the role to women across the country. However, if we want them to take an interest, we have to make the role more flexible and promote the use of technology.”

Lauren Lucas, Head of Projects, Local Government Information Unit (LGiU) said: "Councils should represent their local communities. Local authorities employ a staff that is three-quarters female and deliver services which have a major impact on women's lives. So when only 17% of their elected Leaders are women, it's clear that there are important questions to be asked.

Local government has a long way to go before women are represented equally at a political level, but there are already examples of good practice out there and by working together we will meet this challenge. Local government will be the richer for it."

Picture: More women are needed in council roles from Councillors to office managers